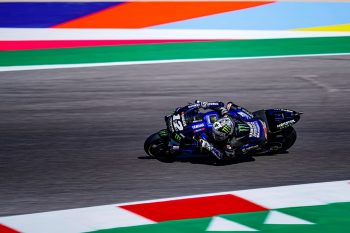 Friday at the Misano grand prix belonged to Maverick Vinales (Monster Energy Yamaha MotoGP) and Fabio Quartararo (Petronas Yamaha SRT), the duo split by just 0.057s on the combined timesheets, the two topped a session each as Marc Marquez (Repsol Honda Team) ended the day in third and over three tenths down.

It was a sunny first day on the Riviera di Rimini, and it was pretty sunny for Yamaha too as the Iwata marque had all four bikes in the top five. Home hero Valentino Rossi (Monster Energy Yamaha MotoGP) was just behind Marquez, with Franco Morbidelli (Petronas Yamaha SRT) in fifth to leave the number 93 the sole non-Yamaha in the top five.

After Quartararo kicked things off in FP1 to edge out the reigning champion, it was Marquez who was the early leader in FP2 as the championship leader got straight down to business, closing down the rookie’s FP1 advantage to just 0.018s on the combined timesheets to head the afternoon session by over four-tenths.

The likes of Alex Rins (Team Suzuki Ecstar) had jumped into the overall top ten in the early stages of FP2, with Morbidelli and Rossi also improving on their FP1 times. The afternoon then went quiet in terms of personal best times, the riders getting some valuable work done on different tyres to see what their preference will be for Sunday’s race.

But with just over ten minutes remaining – and after a couple of close front-end moments – Quartararo was yet to improve his FP1 time and so was Vinales. The traditional FP2 time attack was forthcoming, however, and with eight minutes to go, we had plenty of movement.

Rossi moved into P3 overall on his first flying run on the soft rear, but teammate Viñales would move the goalposts at the top as a 1m32.775s saw the Spaniard leap over three tenths clear. Quartararo was on a personal best behind, but the rookie sensation wasn’t quite able to match Vinales’ time as the 20-year-old went a tenth off.

The Ducati Team riders had a quiet morning but both Danilo Petrucci and Andrea Dovizioso then found a way into the top ten., with Viñales looking like he had P1 in the bag as the flag dropped. Quartararo, however, was on a fast one. Personal best sectors were set by the Frenchman but at the line, it wasn’t quite enough as he ended the day 0.057s in arrears – barely anything splitting the two Yamahas.

Marquez failed to improve and stayed P3, with Rossi and Morbidelli completing the top five. Sixth was a headline in itself as Pol Espargaro (Red Bull KTM Factory Racing) impressed in P6 in both FP1 and FP2, ending the day ahead of Ducati Team’s Michele Pirro. The Italian slipped from P4 in FP1 to P7 at the end of play after failing to go quicker in FP2, but the test rider remains the fastest Ducati on track so far.

Petrucci sits just behind him in P8, with Aleix Espargaro (Aprilia Racing Team Gresini) – P5 in FP1 – claiming P9 on Friday thanks to his morning time. Last year’s winner Dovizioso occupies the last provisional automatic Q2 place in P10 heading into Saturday – not an easy day for the man second in the championship.

Augusto Fernandez (Flexbox HP 40) was fastest on Friday in the Moto2 category, but it wasn’t by much. The Spaniard, now second in the championship after his win at Silverstone, was just half a tenth ahead of the man he’s chasing in the standings, Alex Marquez (EG 0,0 Marc VDS), with rookie Fabio Di Giannantonio (+Ego Speed Up) flying the home flag in third on day one. Australian Remy Gardner (SAG Racing) was eighth fastest.

Albert Arenas (Sama Qatar Angel Nieto Team) topped the Moto3 timesheets in both FP1 and FP2 to prove the man to beat so far, with home hero Niccolo Antonelli (SIC58 Squadra Corse) next up on the overall timesheets. Gabriel Rodrigo (Kömmerling Gresini Moto3) completed the top three to impress as he comes back from injury, with the trio all setting their best laptimes in the morning.

Not since 2011 has Alex De Angelis (Octo Pramac MotoE) taken pole position in the MotoGP paddock, but the Sammarinese rider was a cut above his rivals in E-Pole at the Misano grand prix to take his first FIM Enel MotoE World Cup pole position.

It was a close duel for the top with Matteo Ferrari (Trentino Gresini MotoE), however, as the Italian was forced to settle for second by half a tenth. Xavier Simeon (Avintia Esponsorama Racing) took third to complete the front row. Australian Josh Hook (Octo Pramac MotoE) qualified in 12th. 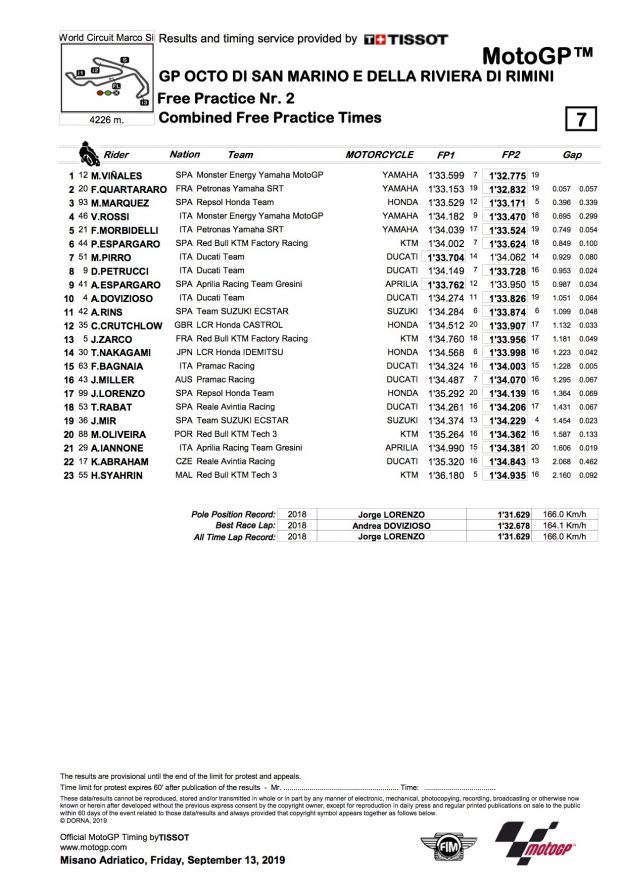 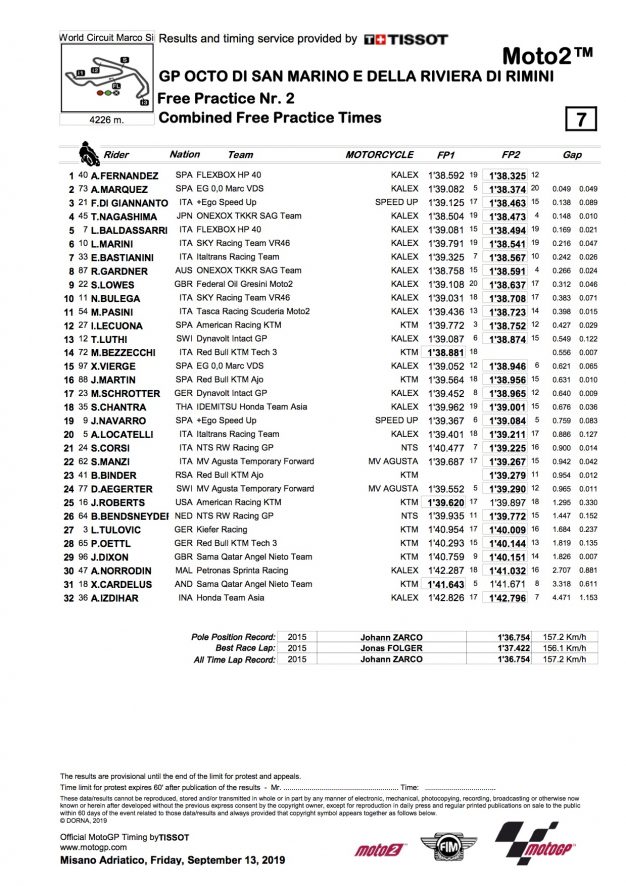 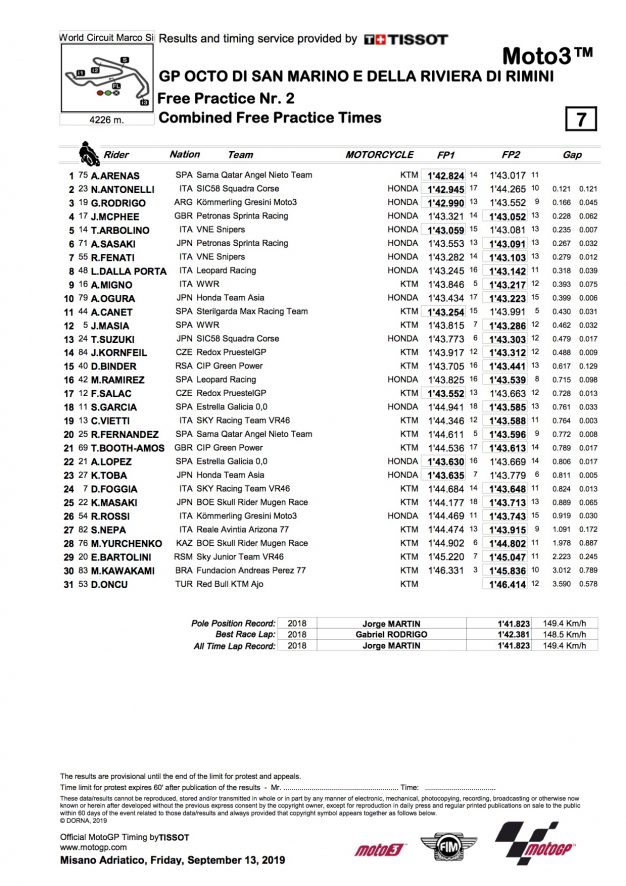 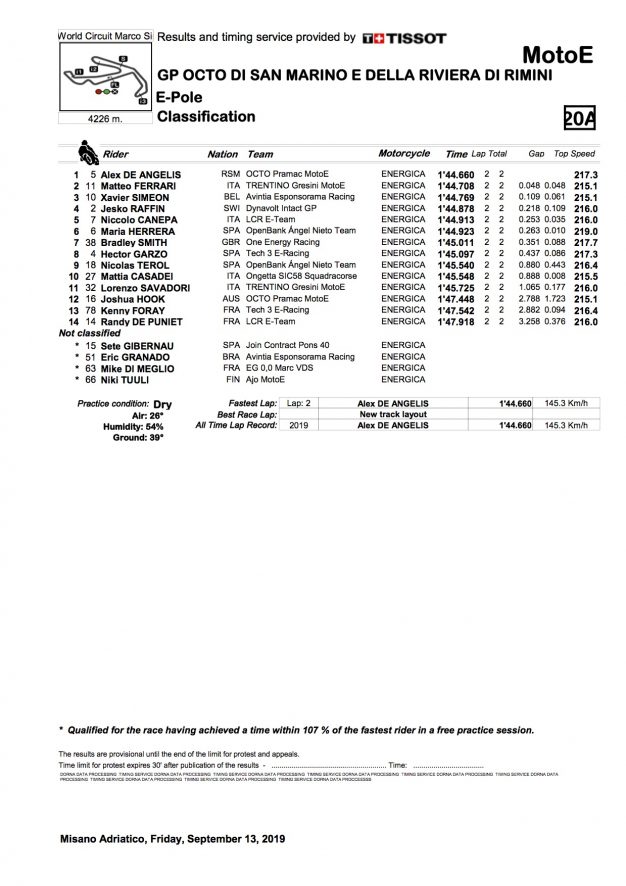