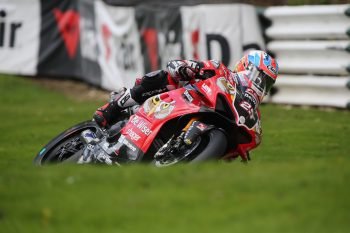 Australian Josh Brookes says leading the Bennetts British Superbike Championship (BSB) is ideal as the Showdown commences this weekend Assen’s 10th round in the Netherlands.

The top six riders in the championship standings only become the title fighters for the final three rounds, with each rider beginning the Showdown with 500 points, plus additional points for each podium position they’ve obtained in the first nine rounds.

Brookes’ seven race wins and five podiums place him atop the standings, where he currently lead Be Wiser Ducati teammate and WorldSBK-bound Scott Redding by three points.

“Going into the Showdown leading the standings is ideal – it is only a small few points but it is still nice to have it,” Brookes explained. “The last few tracks that are in the Showdown have been good for me in the past, so I am hoping that happens again.

“I like Assen, not just because of race results I have had there, but because it is a great track and I am ready to put on a challenge for the championship in these last races.”

Just three rounds remain in the BSB series, where regular points will be paid in the final races to determine the champion.