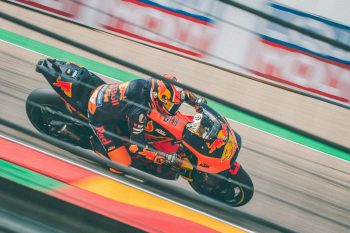 Red Bull KTM Factory Racing’s Pol Espargaro has undergone successful surgery on his left wrist after fracturing it in a nasty crash during FP4 on Saturday at the Aragon grand prix.

Espargaro was ultimately forced out of Sunday’s race, and underwent surgery to have a titanium plate installed on the multi-fragment fracture of the left distal radius.

He’s expected to undergo further medical evaluation this week as the Austrian manufacturer completes two days of testing at the Spanish venue on Tuesday and Wednesday.

“We missed Pol and he was performing well this weekend up until the crash but he had successful surgery this morning and we wish him all the best,” said team manager Mike Leitner. “We have the test on Tuesday and Wednesday now and then we’ll look to Thailand.”

The Spaniard is hopeful of being on the line at the next stop of the MotoGP World Championship in Thailand, scheduled on 6 October.