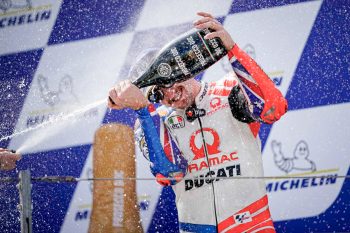 Jack Miller insists he kept his cool in the closing stages of Aragon’s 23-lap MotoGP encounter yesterday, where he made a thrilling last-lap pass on Maverick Vinales (Monster Energy Yamaha MotoGP) for his third podium of the season.

The Pramac Racing ace started from P4 on the grid before quickly finding himself in second, however he was demoted back to fourth following passes from Andrea Dovizioso (Ducati Team) and Vinales.

Keeping himself in the hunt, Miller remained calm in the final laps of the race as Vinales evidently struggled with his tyres – the Australian striking on the last time around the Spanish circuit to cross the line in P3.

“I just tried to keep my pace,” said Miller. “We did a lot of runs throughout the weekend, just working on that, and I sort of stuck to it. I switched map really early and tried to save the rear tyre, I didn’t want to get sucked into trying to chase Marc.

“I rode my own pace, Mav came past but I think he was trying to chase down Marc. Towards the end he just started struggling in the long corners – I kept my cool and was able to bring home a podium.”

Miller is ranked eighth in the MotoGP World Championship standings, and second in the Independent Team rider classification.