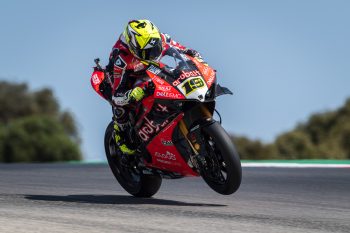 Alvaro Bautista believes learning and adapting to the Magny Cours layout will be key to his competitiveness this weekend at round 11 of the 2019 Motul FIM Superbike World Championship (WorldSBK).

Bautista, who will depart Aruba.it Racing – Ducati at the end of the season after signing to a newly-formed Honda Racing Corporation squad for 2020, captured victory last time out at Portimao, and is still endeavouring to trim Jonathan Rea’s (Kawaskai Racing Team) staggering 91-point advantage in the championship rankings.

“My shoulder is much better than at Portimao,” said Bautista. “So we will immediately see what it’s like when I go on the track.

“I think I will have no problem to ride, but it will be very important for me to do a lot of laps on the track, learn the layout and be competitive in the race. We have to try and keep cutting the gap to Jonathan, but we are ready for the weekend and I hope to enjoy this new track.”

Only three rounds and a total of nine races remain for Bautista to miraculously place himself back in title contention, the Spaniard once holding a 60-point lead in the championship before downfall in form.