Pair of top 10 finishes make for a weekend of positives in French round. 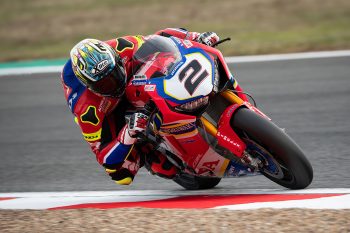 A return to action for Leon Camier at Magny-Cours round of the Superbike World Championship (WorldSBK) resulted in him delivering Honda’s best result of the 2019 season with a seventh-place finish in race one.

Camier had been absent with a shoulder injury sustained at Imola earlier in the year, however, his comeback was a welcome one for the Moriwaki Althea Honda Team in France.

“I pushed as hard as I could and did as much as I could, even though I was struggling in some areas, especially at the end,” he said. “My shoulder was fine, it was more my hands and arms, having not used them for a long time. By the end of the race, mainly in the changes of direction, I was hanging on by my fingertips and it was challenging, because you need good control in that area.

“There were also some damp patches on the asphalt. Anyway, I managed not to make any big mistakes and we scored a result that’s not too bad. I feel like the bike has improved in a couple of areas and the handling was also better – this was another of the day’s positives.”

Sunday saw Camier ride to ninth position after getting the better of Pedercini Kawasaki’s Jordi Torres, continuing his decent run of form despite only managing 16th position in the Superpole race earlier in the day.

“This track is a physical one, at least on the arms, and coming back after four months away definitely doesn’t make it any easier,” he added. “We made a few little changes to the bike and I felt more comfortable in race two.

“I made quite a good start and was in a good group and I rode as hard as I could for as long as I could, managing to hold off [Jordi] Torres and a few other riders. So, all in all, I think the race went okay for us – we identified various areas where we think we can improve and we’ll try and do that in the remaining races.”