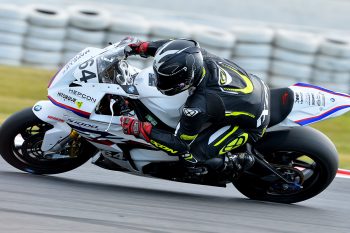 The Maxima BMW team heads to the picturesque Phillip Island Grand Prix Circuit this weekend for the penultimate round of the Australian Superbike Championship (ASBK), with Glenn Allerton and Aaron Morris eager to impress on the 4.445km seaside circuit.

Allerton, who unfortunately was placed on the sidelines for the two races at Winton Motor Raceway last time out due to his wrist not being 100% up for the job, currently sits in sixteenth position with 56-points to his name.

“It was obviously very disappointing not to be able to race at Winton,” said the three times Australian Superbike champion.

“However, I respect the decision which the Next Gen Motorsports team made, which was to withdraw me from the race itself as I was simply going to be danger to myself and my fellow competitors,” he added.

Allerton has declared that he’s feeling 95% certain that he’ll be up for the job this weekend to make the starting grid, which will see the New South Welshman starting his 166th race start in the premier category in the opening twelve lap race on Sunday morning.

“I believe I’ll be a lot better off this weekend than what I was at Winton. Why I say this is because the Phillip Island circuit layout will be a lot easier on my wrist as it’s not a hard-braking style of track, like Winton,” explained Allerton.

As always, Allerton will be giving it his best shot to try and deliver the Maxima BMW team the best result possible.

“I have nothing to lose and everything to gain now. So, if my wrist does hold up, I’ll lay everything on the line and go for it and hopefully that will see the team and I towards the pointy end of the field,” expressed Allerton.

Allerton, who has always enjoyed racing at the Phillip Island Grand Prix Circuit, has had some great success on the twelve corner anti-clock wise circuit. The 38-year-old has finished inside the top five on thirty-one occasions out of a total of forty-four race starts and has also enjoyed nineteen top three finishes, eight of those being victories in the ASBK Superbike class.

“The Phillip Island circuit is amazing and I’m lucky enough to have had some good results there in the past aboard the BMW S 1000RR. Hopefully we can utilize our Maxima BMW to our advantage this weekend and score some good points,” finished Allerton.

Morris endured a somewhat up-and-down weekend at the fifth round of the ASBK Championship, which saw him scoring a 13-7 result that handed him eleventh place for the round.

“We did the best with what we had. With minimal testing at Winton it did unfortunately show in our overall lap times which I was producing,” said Morris, who enters this weekend in nineteenth place in the championship with 30-points on the board.

The 27-year-old, who hails from Newcastle admitted that he did struggle to get the Maxima BMW S 1000RR setup to his liking at the 3.0km rural circuit three weeks ago.

“The team and I were working as hard as we possibly could to try and get the best result at Winton, but it just never seemed to click. We know where went wrong and we understand where we have to improve now,” he added.

“Philip Island is one of those circuits where you need the bike to be working exactly how you want it to handle to get the most out of it,” explained Morris.

“I’m more than confident that Shane [Kinderis] and the rest of the team can get the bike dialed in quickly to suit my style of riding throughout the three practice sessions on Friday. We’ll do the best that we can when we get there and once again strive for the front, as that is where we want to be as a team,” concluded Morris.

Maxima BMW’s Team Manager, Wayne Hepburn, expressed that he and the team are looking forward to going to Phillip Island and hopefully get some solid results for both riders.

“Obviously everyone was upset about the results we had at Winton. However, we have regrouped and we feel confident that we can make steps forward for Glenn and Aaron,” said Hepburn.

“Glenn is feeling pretty confident heading to a circuit which should be bit kinder to his wrist. In the past he has been very strong at Phillip Island aboard the BMW S 1000RR. For Aaron, it will be a question mark on how he adapts to the fast and following circuit aboard the S 1000RR, having never ridden the BMW there before. Aaron has gone well at Phillip Island before, having scored a total of seven top three’s in other categories in the past. Aaron shouldn’t have too much dramas you would think. So, we go with some optimism and hopefully we will have the chance of scoring some top five’s,” finished Hepburn.

The first Free Practice session for the Superbike class gets underway this Friday at 10:45am AEST.