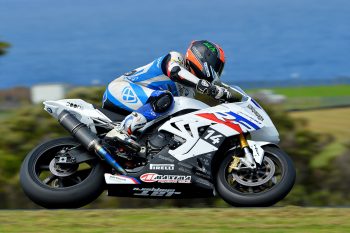 The sixth round of the Australian Superbike Championship (ASBK) has seen Maxima BMW’s Glenn Allerton and Aaron Morris walking away with a sixth and eighteenth place overall at the Phillip Island Grand Prix Circuit.

For Allerton, who scored a 11-6 result was a fantastic result, as it was his completed race meeting since the second round of the ASBK at Wakefield Park in March. Allerton expressed at the conclusion of race two that it has been confidence inspiring.

In the opening twelve lap race, Allerton, who qualified in eighth position, struggled with the strong wind which was testing across the grid line-up.

The biggest issue facing the 38-year-old was that he couldn’t keep the front wheel with enough pressure on the ground to keep pushing forward.

Allerton explained; “Every time I was going forward the frontend was off the deck and the cross-breeze was taking me off the track. Personally, it was a handful to muscle the Maxima BMW S 1000RR around.”

Ahead race two, the team made a massive change to the Maxima BMW S 1000RR to counteract the wheeling which Allerton faced in the opening race. The changes were definitely positive, as Allerton finished in sixth place – an excellent finish after missing the last two rounds.

“Hats off to the team as the changes they did to the bike certainly helped me a lot,” said Allerton after race two.

“However, after five laps I just ran out of grip. We will have to look at the settings and readdress it for next time. All in all, we’ve improved in race two which is positive and we are really happy with that,” finished Allerton, who sits in fifteenth place in the championship with 82-points to his name

Morris, who put in a gutsy effort after he endured a huge crash at the Hayshed during qualifying one on Saturday which resulted him in hurting his right wrist, withdrew from race one after completing a total of eight laps. He expressed that the wind was just unbearable and was impacting his ability to hold onto the bike due to the pain he had with his wrist.

“I tried my best to ride it out in race one, however my wrist was just so sore,” said Morris.

“It’s disappointing as I really wanted to reward the team with a good result today. It wasn’t to be.”

The second race saw Morris finish eleventh, which handed him eighteenth for the round.

“Overall, it has just been a tough weekend,” expressed Morris.

With no testing, I knew I was always going to be up against it. The crash yesterday certainly didn’t help the case either. We’ll hit the reset button and look towards the final round in a few weeks’ time. Massive thanks once again to the team. Hopefully we can finish the year in a high at Sydney Motorsport Park,” concluded Morris.

Maxima BMW’s Team Manager Wayne Hepburn said the weekend has obviously had a few ups and downs. However, overall it has been a lot better for quite a while for the team.

“For Glenn, it’s a been a great day as it’s been a while since he has been able to enjoy two races and walk away on a positive note. While I know Glenn wanted even better results than what he got, he openly admitted that he knew he had to get his head back into the game, which he is and that’s so good to see,” said Hepburn.

“It was nice to see Aaron being able to finish race two. Unfortunately, he struggled with the wind and being able to hold onto the Maxima BMW S 1000RR in the first race. It was very unsettling for him, but he felt a lot more comfortable in the second race. I’m happy for Aaron, as on Saturday as might not have been racing at all today. His body bounced and he stuck it out and did the best that he could, which is a credit to him,” he added.

The grand finale of this year’s Australian Superbike Championship concludes at Sydney Motorsport Park on 1-3 November.