Final round return the aim for Buckley after missing Phillip Island 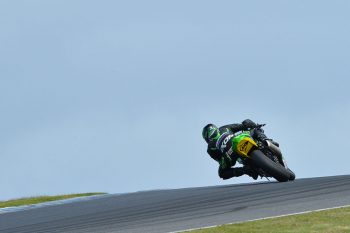 Kawasaki BCperformance’s Kyle Buckley has the target of returning to the Motul Pirelli Australian Superbike Championship grid at the final round after missing Phillip Island’s races.

Buckley underwent collarbone surgery following Winton, but was deemed unfit to line-up at the penultimate round following a frightening crash on Friday morning.

“I was having some trouble on Friday morning,” said Buckley. “I went out in the first session and wasn’t able to hold myself back on the brakes, so I kept sliding forward.

“Second practice, we changed a few things on the bike to make things a bit easier, but I rolled into the Hayshed, lost the front and had a huge crash. I didn’t re-break my collarbone, but I hurt it enough to sit out the weekend. It’s unfortunate, but I’ll try be ready for Sydney Motorsport Park.”

It’s been a frustrating year for the BCperformance mainstay, initially replaced by Lachlan Epis through the opening four rounds before being drafted back in at Winton, where he sustained a broken collarbone in an attrition-filled weekend.