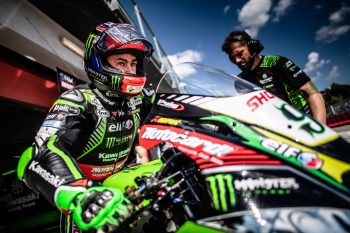 Kawasaki Racing Team has confirmed Leon Haslam will depart the squad at the conclusion of the 2019 Motul FIM Superbike World Championship (WorldSBK) after just one season.

After winning the British championship title in 2018, Haslam was brought into the KRT WorldSBK set-up to join forces with now five-time world champion Jonathan Rea.

He had an immediate positive impact inside the overall KRT awning which culminated in winning the Suzuka 8 Hours race in partnership with Rea on the Ninja ZX-10RR, while also scoring six podiums in his return season.

“KRT and KHI welcomed Leon into the team after a nine-year period with Tom Sykes,” said KRT team manager Guim Roda. “It was an ideal chance for him to regain experience inside the WorldSBK paddock and an incentive after winning the British Superbike title plus previous success at the Suzuka 8-Hours.

“A primary target for 2019 was for Leon to experience the KRT way of working and to take his race rhythm and performance to a new level with goals like competing at Suzuka as a tempting prospect. Winning the 2019 8 Hours race with Jonathan Rea after a 25-year gap for Kawasaki was certainly an incredible achievement alongside regular top-five placings in WorldSBK including several podium visits.

“To achieve all of this despite being away from WorldSBK for three years is a testament to Leon’s skill as a rider – especially as he has endured injuries this year, many of which have not been apparent and have certainly not hindered his hunger for success. It is my hope that Leon can stay within the Kawasaki family for 2020 and use his KRT experience on factory Ninja machinery to achieve yet more success as well as competing again at the Suzuka 8-Hours. Everyone at KRT wishes Leon well for the future.”

Haslam has been linked to the Kawasaki Puccetti Racing team from 2020, while his place alongside Rea in the factory Kawasaki team will likely be taken by current Pata Yamaha pilot Alex Lowes. In turn, Lowes’ place at Yamaha has been filled by Toprak Razgatlioglu.