Suzuki pilot earns first podium since round one in February. 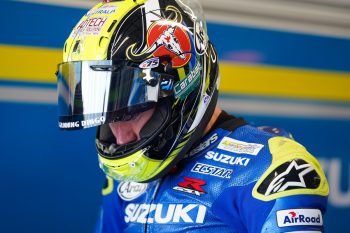 Team Suzuki Ecstar’s Josh Waters says it was a relief to land on the podium at Phillip Island’s penultimate round of the 2019 Motul Pirelli Australian Superbike Championship (ASBK) last weekend, his first time featuring on the box since round one in February.

The multi-time champion has fallen just shy of the podium throughout most of the season, however the Victorian was able to piece together a 4-3 scorecard on Sunday for third overall.

“It’s a bit of relief,” Waters stated to CycleOnline.com.au. “I haven’t been far from the podium all year, it just hasn’t clicked. Even in that race, I’m still a little bit disappointed to not be right there, but when everyone is fighting so hard, it’s quite hard and the boys got away.

“The middle of the year was quite difficult with the new tyre, but when I raced at Suzuka, I proved to myself how I can still go – the lap-time I was able to do on the same kind of bike, the same electronics, and same tyres was unbelievable.

“That was really good for me – it’s easy to give up on yourself, but I’m not. I really appreciate the people behind the scenes that haven’t given up on me.”