Selection of riders return to racing following race one controversy. 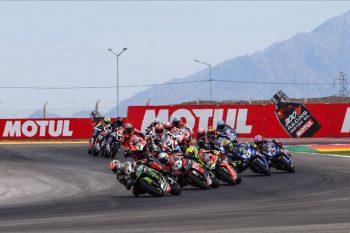 Race two was a thrilling spectacle, with plenty of hard action and big moves all the way through the pack. Despite making his own mistakes and needing to fight in the early stages, Rea romped to win number two of the weekend, holding off the opposition.

Off the start and into turn one, the current world champion held on to his first position, whilst Bautista and Razgatlioglu battled behind. Sandro Cortese (GRT Yamaha WorldSBK) was a fast starter and into fourth, whilst Lowes and his teammate Michael van der Mark were fifth and sixth. Davies had dropped to seventh.

With the race beginning to take shape, Rea pulled away from Bautista, whilst Razgatliolgu was as relentless as ever, chasing down Bautista. Bautista and Rea in-turn were trading fastest lap times. Davies had picked off the Yamahas ahead of him one by one, using the top speed advantage of the Ducati Panigale V4 R down the long straights of San Juan to good effect.

The next target for the Welshman was Razgatlioglu, who was going to need to fight hard to resist the former WorldSBK runner-up. There was drama up front for Rea, who made a big mistake at turn eight and ran completely off the circuit, allowing Bautista to take the lead for the first time.

However, Rea wouldn’t give in and a lap later, on lap eight, Rea fought back and pushed his way back to the front at turn seven, shoving Bautista wide. The squabble between the two heavyweights allowed Razgatlioglu and Davies to close up.

With 13 laps left to go, Davies took third from Razgatlioglu with a strong move at turn 10 on the Turkish rider. The former WorldSSP champion from 2011 was now a move on a mission and soon, caught his teammate. Bautista tried to fight but Davies powered ahead of his teammate two laps later to take second. 2.6s to close down on the race leader, Davies had plenty of work to keep him occupied for the remainder of the race.

Bautista however was in more problems and with nine laps to go, as Toprak Razgatlioglu had regrouped and was immediately able to get ahead of the Spaniard, sweeping around the outside at turn three to take third from the race one winner. Bautista was losing time to Michael van der Mark hand over fist and needed to get to the end of the 26-year-old Dutchman got him.

Further down the field, Leandro Mercado (Orelac Racing VerdNatura) was having an incredible race, climbing all the way up to the fringes of the top 10. The home hero picked off Jordi Torres (Team Pedercini Racing) and at turn 10 with eight laps left, dived up the inside of factory Kawasaki rider Leon Haslam to take eighth place.

A lap later, and Eugene Laverty (Team Goeleven) was up ahead of Haslam and Torres. Ahead of all of them, Michael Ruben Rinaldi (BARNI Racing Team) was a sitting duck. With four laps to go, Mercado got ahead of Rinaldi at turn 15, sparking a massive roar from the partisan crown trackside.

However, Laverty got ahead of the pair of them on the front straight, pushing Mercado back to eighth whilst the Irishman went in pursuit of his best result since Aragon. In terms of Mercado, he had come from 19th to eighth; an astonishing comeback.

Out front on the final lap, Rea was uncatchable and took victory for a fourth time in Argentina and now, extended his consecutive point-scoring finishes run to 45 – the first time a rider has ever achieved this. Chaz Davies was up into second whilst Toprak Razgatlioglu completed a stellar weekend with another podium, his sixth in seven races.

Fourth belonged to van der Mark whilst Bautista limped home to complete the top five. Alex Lowes was up to sixth. Eugene Laverty put in a strong ride up to seventh, but ride of the day went to home-hero Mercado, who stormed from last on the grid to eighth, much to the delight of the crowd. Jordi Torres (Team Pedercini Racing) was ninth ahead of Leon Haslam in 10th. Sandro Cortese slipped to 15th, having run as high as fourth in the early stages. 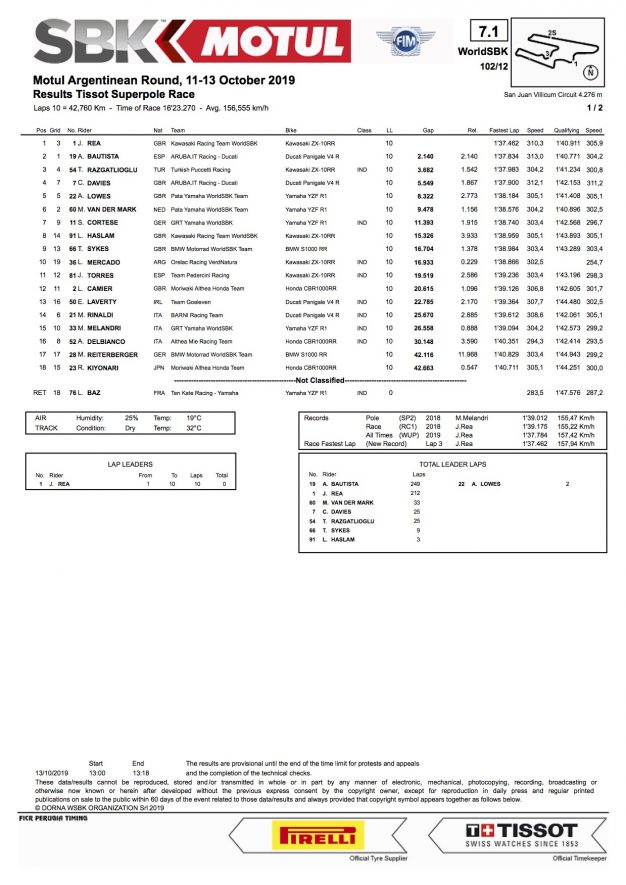 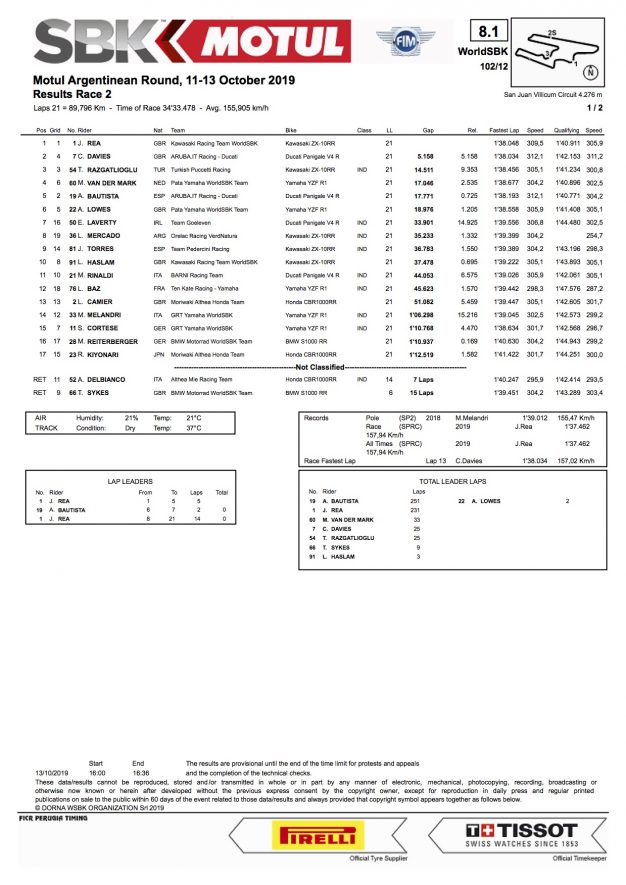 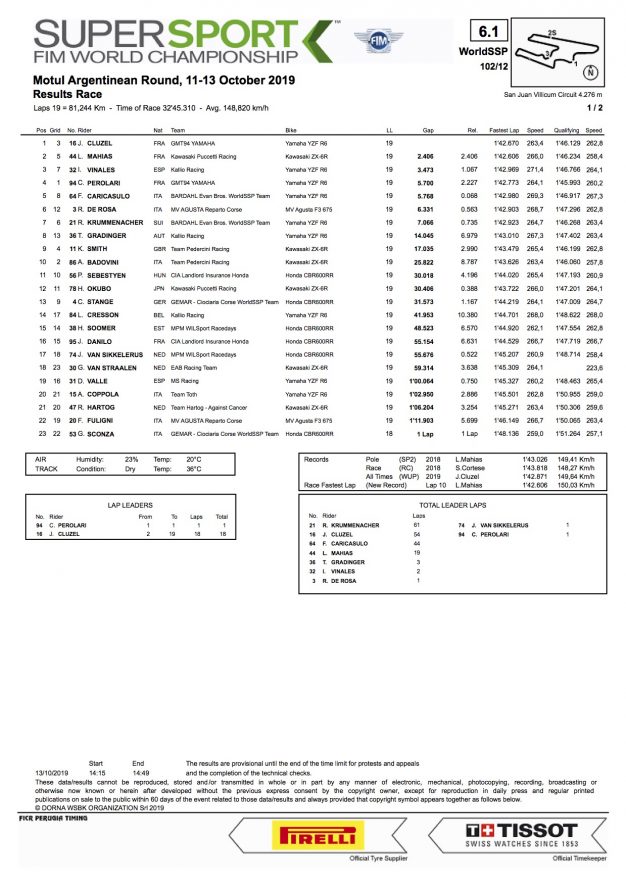