Riding style not compatible with the bike insists Melandri

Difficulties continue for the GRT Yamaha rider in Argentina. 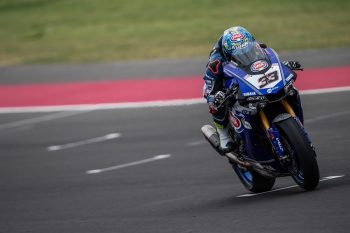 Retiring Marco Melandri has stated his riding style seems to be incompatible with the GRT Yamaha YZF-R1 after another weekend of difficulties at Argentina’s penultimate round of the 2019 Motul FIM Superbike World Championship (WorldSBK).

Melandri suggests the bike and himself are ‘working in opposite directions’, despite many efforts from the squad in endeavouring to adapt the bike to his style.

The Italian was one of six riders who elected to sit out the opening race due to safety concerns on the track conditions, however returned to racing on Sunday to post a 15-14 scorecard.

“This has been another weekend where I’ve struggled a lot,” Melandri admitted. “My main strength is my riding style and, unfortunately, this doesn’t seem to be compatible with the bike.

“Every time I tried to push harder after a few laps I made a lot of mistakes and lost ground. It looks like me and the bike are working in opposite directions still. I’ve tried many things with the team to find a solution this season but, as the results show, we’re still looking.”

Melandri announced his retirement from professional racing in July, with just one race left in his career at Qatar’s season-finale.