Japanese rider signs on ahead of home grand prix at Motegi. 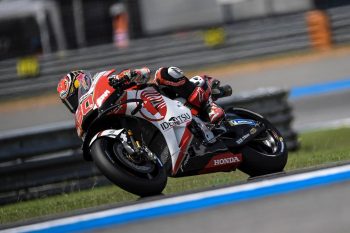 Honda Racing Corporation (HRC) has extended Takaaki Nakagami’s contract for the 2020 MotoGP World Championship, where the Japanese contender will continue to ride under LCR Honda.

Now in his second year aboard the RC213V, Nakagami has demonstrated consistent improvements in his riding and results in the premier class throughout 2019 with eight top 10 finishes and a best result of fifth at Mugello.

After his home race in Motegi, Nakagami will undergo an operation on his right shoulder to resolve an injury that has troubled him throughout the season.

The nature of the operation warrants an extensive recovery period, forcing him to prematurely end his 2019 season. By performing the operation now, Nakagami is aiming to be fully fit for the first test of the 2020 season in Sepang.

“First of all I am delighted to stay with Honda and the LCR team,” said Nakagami. “I have been able to improve a lot this year and Honda have shown me great support and given me a very strong package. I am sure together we can continue this in 2020. About the injury, after the crash I had in Assen I found myself in some pain and lacking a bit of strength in my shoulder.

“I went to the doctor to fully understand the situation and while I have been able to ride with the injury, it has not been ideal so we made the difficult decision alongside Honda and the LCR Team to have this operation now.”

Johann Zarco, who was benched by Red Bull KTM Factory Racing last month, has been linked as a possible replacement for Nakagami following the Japanese grand prix.