Quartararo in no rush for rookie of the year title

Frenchman a mathematical chance of earning the title in Japan. 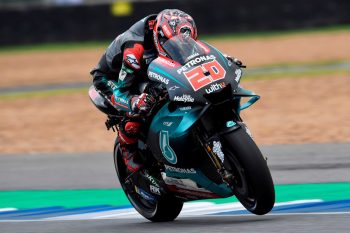 Fabio Quartararo says there’s no rush to claim the rookie of the year title as he enters the Japanese grand prix as a mathematical chance of earning the honour.

The Petronas SRT Yamaha rider has starred in his debut season in the MotoGP World Championship, being a regular podium challenger throughout the 15 rounds so far.

The Frenchman is confident of challenging for a top three at Motegi this Sunday, the Yamaha pilot coming off a thrilling battle with recently-crowned champion Marc Marquez (Repsol Honda) in Thailand.

“We’ll keep working in the same way as we have in the past few weeks, and try to challenge for a good position and to aim for the podium,” Quartararo explained. “We’re also obviously keeping an eye on the rookie of the year title with Motegi being the first place where it can be won – but there’s no rush on it either!

“We’ve seen that Marc [Marquez] has been really fast at Motegi in the past, but it’s also a circuit where I was very strong last year, and for sure it’s going to feel great to be able to ride a MotoGP bike there.”

Quartararo is currently ranked seventh in the championship standings with four rounds remaining on the calendar.