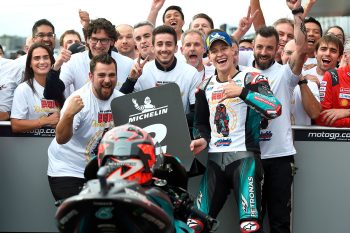 A sixth podium of the 2019 MotoGP season at Twin Ring Motegi in Japan has secured Fabio Quartararo Rookie of the Year honours.

“I’m delighted with the weekend, because the goal we set ourselves at the beginning of the season was to be best newcomer and we’ve already managed it,” Quartararo reflected. “We have 163 points, which is an amazing achievement considering we were targeting between 50 and 90.

“We’ve been a big surprise to everyone and it’s nice to be able to officially say that I’m Rookie of the Year. When I look back to last year when I was fighting for top 15 finishes in Moto2, I only think about how much I owe everyone at Petronas Yamaha SRT and Yamaha for putting their trust in me.

“I’ve done my maximum to help them believe in me, and together we’ve done an amazing job. We’re still fighting for good positions in the championship, but trying not to think about it too much, so we’ll take the remaining races as they come and see what happens.”

The French revelation also managed to extend his lead in the Independent classification to 38 points and moving up to sixth in the overall championship fight.