Former champions Maxwell and Waters left without deals for 2020 season. 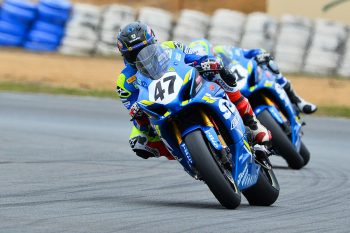 Team Suzuki Ecstar will make a shock exit from the Australian Superbike Championship (ASBK) ahead of 2020 after Suzuki Motorcycles Australia opted to pull its factory involvement from the series.

Suzuki’s decision will see Wayne Maxwell and Josh Waters left without rides for next year despite each signing two-year deals at the beginning of this season.

The news was initially broken by current ASBK number three Maxwell via social media on Thursday evening and then it was team owner Dale Brede who later confirmed the information in a statement of his own.

“Unfortunately it’s with a heavy and sad heart that I have to announce the dream is over,” Brede stated. “After three years and one championship, my time as the owner of the factory race team for Suzuki has finished.

“We have been given the news that globally Suzuki are restructuring all of their programs and, as a consequence, Suzuki Australia no longer has the budget necessary to ensure that our program operates at the level needed in today’s super-competitive ASBK series.

“My heart goes out especially to Josh and Wayne, who should have been enjoying the second year of their current agreements, but as much as the local guys at Suzuki wanted to make its work, it just wasn’t possible.”

Suzuki Motorcycles Australia marketing manager Lewis Croft has since moved to clarify that the decision to pull out was in fact largely a local one, rather than being part of a broader global restructure contrary to Brede’s comment.

Team Suzuki Ecstar debuted in 2017 as a single bike program with Waters at the helm, going on to clinch his third-career championship that season.

Last year saw the team expand to two riders with Waters joined by Mark Chiodo, before this year it was Maxwell, Waters and satellite rider Alex Phillis who formed the squad.

It was rumoured at Sydney Motorsport Park’s final round that the team was considering scaling back to a single rider once again for 2020, however, this latest news instead sees the team move away from the ASBK series altogether.