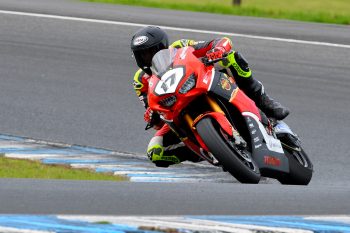 Troy Herfoss has revealed this week’s ASBK test at Phillip Island allowed him to confirm his tyre selection for the 2020 season, the multi-time champion satisfied with the early potential of the Michelin rubber.

The two-day test was Herfoss’ first hitout on the Michelin tyres against his rivals, lodging a number of impressive times to ultimately wind up third fastest at the end of testing on Thursday.

The Penrite Honda Racing rider believes he maximised his time out on track over the eight sessions, enabling him to gain a greater insight into the characteristics of his new tyre options.

“It was really good and we had a lot of stuff to work through,” Herfoss told CycleOnline.com. “We’ve been pretty lucky over the last few years with the same model bike and the same tyres, but while much of the bike is the same, we have the Michelin tyres this year.

“They’ve been out of ASBK competition for a number of years, so there’s a lot of work to be done being the only rider in the field using them at the moment. The Michelin tyre was really good, and we had a few tyres there. We have already done a test at Wakefield, so we had an idea of what sort of tyres we would need for the whole year, and we confirmed that over the two days.

“We did a lot of laps on the Phillip Island-spec tyre, and I posted all of my lap-times on the race tyre. I feel as the conditions were pretty warm, there’s a lot of potential to go a lot faster than what I was. In saying that, I was really happy with the lap-time, and overall based on my position compared to my competitors, it was by far the closest I’ve been to the front in the pre-season test, so that’s pretty positive.”

The opening round of the 2020 Mi-Bike Motorcycle Insurance Australian Superbike Championship is scheduled for February 27-1 March at Phillip Island, taking place alongside round one of the Motul FIM Superbike World Championship (WorldSBK).