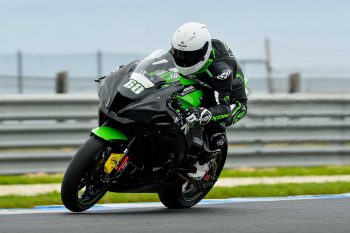 Glenn Scott’s first time out with Kawasaki BCperformance at last week’s Phillip Island Australian Superbike Championship (ASBK) test was met with optimism, the number 68 adapting quickly to the ZX-10RR as he returns to the track after suffering a number of injuries last year.

Scott, who was a Kawasaki-backed privateer aboard the ZX-10R for the last two seasons, made a strong return to the bike throughout the two days of testing, admitting he surprised himself in his quick adaption to the bike at such a high-speed circuit.

The New South Welshman went ninth fastest on the opening day, improving his time by almost a second on day two, ultimately winding up 11th on the timesheets.

“I’m just happy to be back racing, so it was all smiles down there,” Scott told CycleOnline.com.au. “The new team is great and I have three great guys I’m working with, plus a suspension technician – so there are heaps of hands, which is a bit of a change to the privateer set-up where you do a fair bit of stuff yourself behind the scenes. I suppose riding with a team is great because you rock up and everything is sitting there ready to rock and roll.

“The biggest difference this year is that I’m on the ZX-10RR, which is nice – as a privateer, I was on the ZX-10R. There a few other changes that are just nice – it’s a really nice bike to ride and I got to grips with it really well.

“All in all, I think I pulled up pretty well – I think the biggest thing was getting my eye in so quickly – I surprised myself actually. That just gives credit to the team that they’ve got a pretty stable motorcycle as a base and I was able to concentrate on getting my eyes up to the speed.”

The opening round of the 2020 Mi-Bike Motorcycle Insurance Australian Superbike Championship is scheduled for 27 February-1 March at Phillip Island, taking place alongside round one of the Motul FIM Superbike World Championship (WorldSBK).