Factory KTM pilot slashes gap to the pace-setters in Malaysia. 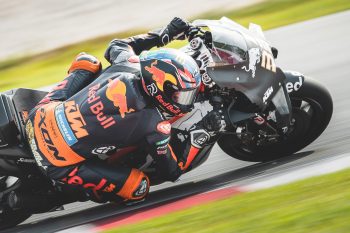 Red Bull KTM Factory Racing newcomer Brad Binder is confident he’s made significant steps forward at the Sepang test, slashing the gap to the leaders from his first two outings on a MotoGP bike last year.

The premier class rookie, who was over two seconds off the pace at the pair of Spanish tests in 2019, moved to within a second of the pace-setters during the three-day test in Malaysia.

The South African wound up 21-18-17 fastest on the timesheets across the three days, where he continued to develop his set-up ahead Qatar’s season-opener next month.

“In the first two tests I was 2.1s off and now I am 0.7s,” Binder indicated. “It’s a big step forwards for us. The feeling and the comfort on the bike is way-better but we have a long, long way to go. I need to keep working and it will pay-off soon.

“If you look at the position then it is dissatisfying but the main thing is the gap. A couple of tenths have made a good difference in the standings. I have seen that it’s not too difficult to make a fast lap but I need to do twenty of them! It’s been a positive six days. We’ve progressed every day. We can reset and start again in Qatar.”