Action-filled three days of racing planned for the Australian round. 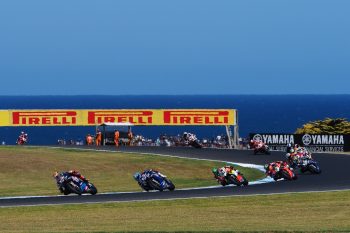 The schedule for round one of the 2020 Motul FIM Superbike World Championship (WorldSBK) at Phillip Island has been made official, the weekend set to also feature the Mi-Bike Motorcycle Insurance Australian Superbike Championship (ASBK) opener on 28 February-1 March.

The three-day Yamaha Finance supported round will see four world championship races take place- three WorldSBK and one WorldSSP – and 12 hit-outs across the four ASBK classes. The ASBK will feature the Australian Superbike, Supersport, Supersport 300 and the young riders of the Oceania Junior Cup.

Track goers will be able to see the WorldSBK riders for the first time in free practice one at 10:30am on Friday, as Kawasaki Racing Team’s Jonathan Rea begins his title defence in a grid that features a number of new riders – Scott Redding’s the standout on the factory Ducati – and a return of the mighty Honda Factory Corporation with its all-new CBR1000RR-R SP.

Alvaro Bautista, who took a clean sweep of victories at Phillip Island in 2019, and Leon Haslam have signed with Honda to spearhead its renewed WorldSBK offensive.

The traditional 22-lap WorldSBK races will be held at 3:00pm on Saturday and Sunday, sandwiching the 10-lap Superpole sprint at midday on Sunday.

Meanwhile, the single WorldSSP race at Phillip Island will be held at 1:15pm on Sunday, with reigning champion Randy Krummenacher now collaborating with MV Agusta after winning the 2019 title on a Yamaha.

Local attention though will focus on Australia’s 16-year-old Oli Bayliss, son of three-time world superbike champion Troy, who has been granted a wild card in WorldSSP for the Phillip Island opener and will campaign the Cube Racing Yamaha YZF-R6. For more information, visit www.worldsbk.com.au.