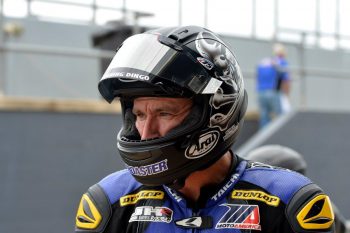 The American Superbike great, who recently competed in the International Island Classic last month, will pilot a Yamaha YZF-R1 with the support of the Addicted to Track Team.

“I have to say that I’m overwhelmed by the outreach of support to bring to fruition the idea of participating in a round of the Australian Superbike Championship,” Hayes commented.

“After simply chatting about how much fun it would be with Mark Bracks, he assembled all the necessary people to make it actually happen. From the Addicted to Track team, Phillip Island Circuit, and Motorcycling Australia support, arose the final touches of help from Ohlins, Dunlop tyres, and Mojo Yamaha’s Dave Crussell.

“With all of this backing, I have to admit to feeling a touch of pressure to perform well against the ASBK regulars. But I truly enjoy the circuit, and absolutely love competition, so I’m looking forward to trying to get into the fight with a few of my racing friends.”

Hayes strengthens what is already an incredibly competitive line-up, making for an exciting start to the championship. The ASBK will run alongside round one of the Motul FIM Superbike World Championship (WorldSBK) at Phillip Island.