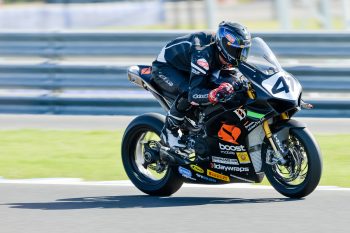 The McMartin Racing operated squad, who hosted Jamie Stauffer with Boost backing at a selection of rounds in 2019, will be formally known as Boost Mobile Racing with K-Tech this season.

Boost Mobile branding remained on Maxwell’s Ducatis at Phillip Island’s official ASBK test last month, where he dominated the timesheets across both days, going beneath the Australian Superbike lap-record.

“Craig has a good relationship with Jason from Boost Mobile,” Maxwell explained to CycleOnline.com.au. “He’s been able to continue that relationship, and they know they’re in a good position to get some great exposure. Hopefully we can continue to deliver that throughout the season.

“I’m definitely proud to have Boost Mobile continue their involvement with the team – I’m proud to not only be sponsored by them, but also the whole team – they’ve done such an amazing job to put it all together, and I’m excited about unveiling the bike when we get to Phillip Island next week.”

The opening round of ASBK, which will run in conjunction with the Motul FIM Superbike World Championship, is scheduled for 28 February-1 March.