Racer comments from Victoria's first round of the year.

A selection of riders detail their weekend at Phillip Island’s round one of the 2020 Mi-Bike Motorcycle Insurance Australian Superbike Championship (ASBK). Team and privateer competitors can submit comments to [email protected] by Monday afternoon following events for inclusion in the post-event Quotebook feature. 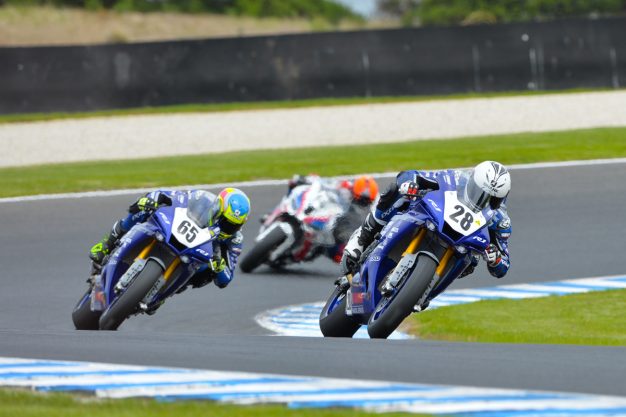 Cru Halliday – (Yamaha Racing Team) – Second overall:
Finishing on the podium at the opening round of the championship is always a good way to start the year. It sets the time for the year and it’s the kind of results myself and the team expect each weekend. I felt great on the bike all weekend and despite changing conditions throughout the weekend, we barely touched the bike. Infact, after race two, we didn’t touch a thing, so the Yamaha Racing Team did a sensational job. Congratulations to Wayne on his racing this weekend and I enjoyed battling with him. He is such an experienced rider and I continued to pressure him, hoping for a mistake, but he kept his composure in all three races and deserved his win this weekend. But, we are going to build form this. I feel we are better placed this year as the 2020 R1 feels good and I love racing it. Let’s go for round two.

Aiden Wagner (Yamaha Racing Team) – 14th overall:
A tough and frustrating weekend for me and I just couldn’t ride the way I wanted to. I was in touch with the leaders in race one but made a couple of mistakes and lost the tow late in the race. Race two wasn’t good and then I fell on the final lap of race three. I just need to put this behind me and be better at round two.

Bryan Staring (Kawasaki BCperformance) – Fourth overall:
Fourth is not a bad result. I went 4-4-6 over the weekend, so it’s decent enough for the first round with Kawasaki BCperformance. We’re still disappointed because in the last race, we weren’t quite fast enough there to cap-off the round. We had a great second race and we were able to fight, but once the pace stepped up today we couldn’t quite go with the front group. That’s why I’m disappointed overall, however, I feel like we had a solid comeback from a very difficult start to the weekend.

Glenn Scott (Kawasaki BCperformance) – 17th overall:
We struck a lot of bad luck this weekend and in qualifying I got caught out with some liquid on the track. They’re just really unfortunate events and it’s no one’s fault, but they kept coming our way. We turned it around in race two and showed that there’s potential when I came from 26th on the grid to 13th position. That’s a solid race and there’s some consistency there, so we can build from that together as a team.

Troy Herfoss (Penrite Honda Racing) – Fifth overall:
It was a similar opening round to always for us. Everybody’s always really pumped up and the pace was really fast from the beginning – it was a busy start to the year with a lot of stuff to get through. As the weekend went on, we couldn’t really get going to challenge for the win, but as far as the bike and everything goes, I’m really happy. The goal is to always get through round one as cleanly as possible, which we did. The Michelin tyres were great and working with Paul Free in the team again was really good, so it’s all coming together. It would have been nice to give Deon [Coote] and the Penrite Honda Racing team a podium on WorldSBK weekend, but it just wasn’t to be. I’ve come out of round one in previous years worse off, so fifth was okay and we’ll now get back down to work heading into Wakefield Park. I’m really looking forward to getting into the upcoming rounds of the season.

Mike Jones (DesmoSport Ducati) – Eighth overall:
We didn’t reach our full potential this weekend, not improving on my times from the test until the final race, and against a field this strong we can’t afford to give points away like that. The team made some changes to the bike on Sunday morning, and it improved the confidence I had in the front under brakes, and also gave me some more grip in the rear, which really let me race harder and faster. When you look at the lap times, race three was by far the best but a bad start had me ninth and I fought my way back to fourth.

Josh Waters (JW Racing) – Third overall:
It’s really good to get the results we needed early and the bike felt great, obviously the racing isn’t going to get any easier from here, but we are ready for it.

Brendan McIntyre (Western Motorcycles Suzuki) – 18th overall:
We went 15-18-16 in the three races, not what we were aiming for coming into the round but a solid recovery from the rear of the grid to get in the points. I felt I clicked with the Island at the recent test, setting a PB time which was also my first ride on a motorbike since last November. I’m really looking forward to my home round at Wakefield Park and if we sign on some more support for the rest of the season.

Oli Bayliss (Cube Racing) – First overall:
I came into the weekend confident that I would be able to win races, and riding World SuperSport definitely helped me understand what it’s like to ride at the next level. It’s a great way to start the season, and against riders like Tom Toparis before he heads to Europe, so now I just need to keep focused as we go to the different race tracks to make sure I do it again next round. The final race didn’t start too well to be honest, I wasn’t totally comfortable, and I ended up lifting the front wheel off the start and had to work hard to stay with the leaders. In the final few laps though, I planned my moves and, in the end, crossed the line 0.017 ahead to take the race and round win.

Max Stauffer (GTR MotoStars Team) – Fifth overall:
It was great to finally be aboard the GTR MotoStars YZF-R6 at Phillip Island, and racing in the 600 class- something I’ve been eagerly waiting for. Heath, Damo, Dad and I worked hard on the bikes and the set up allowed me to push hard all the way through the races, which I did. Both the team and I feel we had a good first round, so I’m looking forward to the rest of the season.