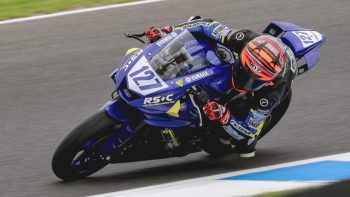 The newly formed GTR MotoStars Team made it’s racing debut at Round 1 of the Australian Superbike Championships in Phillip Island on the weekend, and impressive performances from riders Max Stauffer and Archie McDonald has launched the team directly into title contention!

A steady start in race one saw Max playing catch up early on, but he soon found his rhythm and began closing the gap to the leaders later in the race, ultimately finishing 6th in his Supersport debut.

In race two, Max got a better start and with the experience he’d gained in the first race, held onto the leaders- setting his fastest lap of the race at 1.36.5. Involved in a tight scrap with Jack Passfield and Nic Liminton, the teenager held his nerve and secured a sensational 3rd place finish behind Tom Toparis and Oli Bayliss.

The final race of the weekend started poorly, with a bad start and a lot of ground to recover, however, Max found his stride and made his way through the field to finish 7th giving the rookie a 5th overall on debut.

Max Stauffer- “It was great to finally be aboard the GTR MotoStars YZF-R6 at Phillip Island, and racing in the 600 class- something I’ve been eagerly waiting for. Heath, Damo, Dad and I worked hard on the bikes and the set up allowed me to push hard all the way through the races, which I did. Both the team and I feel we had a good first round, so I’m looking forward to the rest of the season.”

In the 300 Supersport Class another class rookie, 13-year-old Archie McDonald put his name in the headlines with a terrific trio of rides aboard his Pirelli shod Yamaha R3.

Qualifying 11th for his 300 Supersport debut, few imagined he’d pose a threat to the class regulars, however, he soon got into the mix in races one and two- tussling for position and taking a pair of 6th place finishes. There was more to come though, and after some small set-up changes from the GTR MotoStars Team, Archie came out swinging in his final encounter, claiming an outstanding 2nd place finish for 2nd overall!

Archie McDonald- “Words can’t describe it. I’m just so happy with my bike, my team, my weekend. Finishing on the podium in race 3 is my biggest achievement to date- not bad for a rookie! I’m still just so excited and cannot thank everyone enough. We have a whole year ahead of us. It’s only just begun!”

Team Manager, Heath Griffin could hardly contain his excitement with the team’s debut and is eagerly awaiting to go racing again.

Heath Griffin- “Starting out with a new team, all new bikes and equipment, and only 3 months to bring it all together has been very challenging, and a massive effort from everyone involved. A special mention to our Crew Chief Jamie Stauffer, who has been working day and night to put together all new race bikes, which have proven to be instantly competitive. With two class rookies on the team, and minimal time for preparation and testing, my expectations coming in to round one were that a top 10 finish for both lads would be a successful weekend, and a top 5 would be exceptional. For both riders to put it on the podium and be instantly in the championship hunt from the get go shows the immense talent and determination they both have, and I’m extremely proud of both of them for their performances.
Recruiting these guys for us was Damian Cudlin. Max was one of the original Juniors to come through Damian’s MotoStars program, and Archie has followed in his footsteps, which makes it clear to me that Damian’s style of junior training has contributed heavily to the instant competitiveness of both riders and is why we support MotoStars.
Roll on round 2 at Wakefield where we’ll be aiming to take it to the front runners in both classes again.”

Team Coach and MotoStars Director, Damian Cudlin was equally impressed with his riders and performance of the new team and predicts things will only improve as the season goes on.

Damian Cudlin- “I’ll admit that if someone told us that we could have two class rookies on the podium this weekend, I’d have told them the chances were slim. But slim doesn’t mean impossible, and while I’m certainly thrilled for the boys, I’m not totally surprised by their achievements. We chose these kids because we know they can ride- we just needed to give them a competitive package and make them comfortable for the results to show- and they have already. We are immensely proud of our boys and I can only see them getting stronger as the season continues.”

The GTR MotoStars Team will take part in tests at Wakefield Park next week, in preparation for Round 2 of the Australian Superbike Championship there on the 27/28/29th of March. 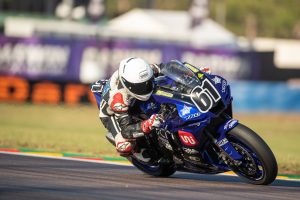 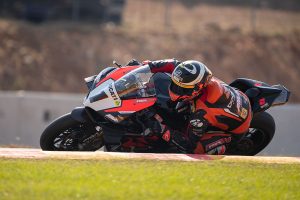