MA open to re-entering discussions with Supercars at an alternative round. 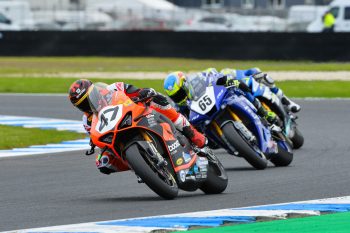 Perth’s scheduled fourth round of the 2020 Mi-Bike Australian Superbike Championship (ASBK) that was set to run alongside the Virgin Australia Supercars Championship has been cancelled.

The Western Australian stop is the latest venue to be impacted by the ongoing coronavirus outbreak, with Wakefield Park and The Bend already postponed to abide by new restrictions on large outdoor gatherings imposed by the government.

Motorcycling Australia’s (MA) CEO Peter Doyle explained the decision to cancel the event rather than postpone it has come after taking into consideration the travelling element, with the event initially intended to take place a week after The Bend, allowing for Superbike teams to directly travel to Western Australian.

Doyle also cited a chaotic schedule in the back half of 2020 if racing resumes as another contributing factor in the cancelling the Perth round, however he hasn’t ruled out re-entering discussions with Supercars for a potential collaboration at an alternative round should an opportunity exist.

“The reality is, is that it’s not going to go ahead as we know it right now,” Doyle revealed to CycleOnline.com.au. “Supercars obviously has their own problems like everyone else, and the event was always put on – from our perspective – the weekend after The Bend, so the Superbike teams going to The Bend could go directly to Perth.

“That probably has no chance of happening now, so as it stands today, that situation is cancelled. Once Supercars confirms what they’re doing, we may re-enter discussions about it, but it may not be in Perth – it maybe somewhere else.

“If it was to come back on, it really depends what Supercars’ schedule looks like, because the issue we have – let’s say we start to recover from this thing – is that the back half of the year is going to be horrendous as far as event calendars go. The opportunity may not exist because we might be racing on the same day as them at a different venue.”

Wakefield Park and The Bend are the only two ASBK rounds postponed at this stage, with rescheduled dates still to be confirmed.