WorldSBK also set to potentially host next round at Spanish circuit. 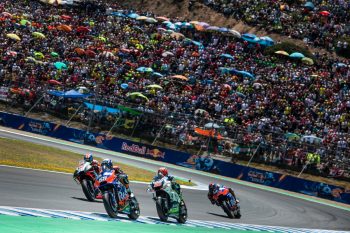 A proposal is in place for Jerez to host the opening two rounds of MotoGP and a Superbike World Championship round from late July.

The Regional Government of Andalusia, the City Council of Jerez de la Frontera and Dorna Sports have agreed to make the proposal to the Spanish government.

All three parties have agreed to make a proposal to the Spanish government to organise two MotoGP World Championship Grands Prix at the Circuito de Jerez-Angel Nieto on the weekends of 19 and 26 July, respectively.

Also proposed is a Motul Superbike World Championship round at the venue, to be held on 2 August. Once authorisation from the Spanish government has been given, the three events will be proposed to the FIM for inclusion on their respective calendars.