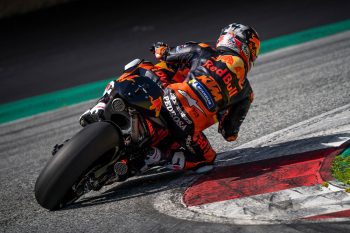 Red Bull KTM has completed a private two-day test at Red Bull Ring in Austria as Dani Pedrosa and Pol Espargaro took to the Spielberg circuit aboard their RC16 machinery.

The KTM team relocated to the confines of the Red Bull Ring and in full adherence to health and safety guidelines in the wake of COVID-19 on Wednesday and Thursday this week.

“I’m really happy we could organise these two days here in Spielberg and get the MotoGP team back on track,” commented Mike Leitner, Red Bull KTM team manager. “It was a big effort to get it done, but we tested everybody, made it happen and I think it was key for the mentality of the company, the team, everyone in the racing department and especially the riders.

“In general, we have been lucky with the weather. It was good for Pol to get back to race speed – after such a long time off the bike riders really need laps. For Dani also it was important to restart the test program. Thanks go to the team for making this happen and to Spielberg for letting us test here. We now hope to have more news on the calendar in the middle of June and we are really looking forward to go racing again.”

The wheels of the KTM RC16 were spun for the first time since the IRTA test in Qatar at the end of February. Over 20 team members joined current racer Espargaro and test rider Pedrosa for further set-up work with a view towards a potential first event of the season in the coming months.

All had tested negative for COVID-19 before resuming MotoGP activities after a three-month pause. Espargaro’s teammate, Brad Binder, could not take part in the test due to the travel restrictions affecting his current location in South Africa.