Two-day test completed as teams prepare for return to racing. 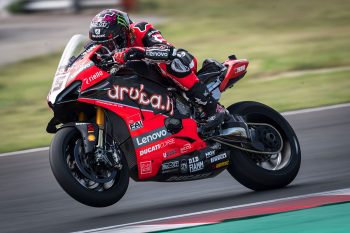 Redding’s time of a 1m33.067s put him at the top of the charts, going almost a second faster than his fastest time of day one and a time that was faster than Tom Sykes’ qualifying record.

“These were three very positive days as it was important to regain the feeling with the bike,” Redding commented. “We have worked a lot especially with used tyres and we have tried new solutions that have given positive feedback.

“I’ve been working out a lot these months with the goal of losing weight. In the end, I also managed to set a good chrono, but this is not important. It was great to get back to work with the guys and I can’t wait to get back on track.”

World champion Jonathan Rea (Kawasaki Racing Team WorldSBK) was second fastest on his Kawasaki ZX-10RR as he bounced back from a heavy crash on day one to post a time of 1m33.206s, followed by Michael Ruben Rinaldi (Team GoEleven) in P3.