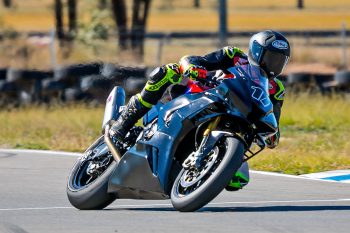 A shakedown outing aboard Honda’s brand new CBR1000RR-R has left double Australian Superbike champion Troy Herfoss impressed with the package that he will take into the 2020 remainder once competition resumes.

The Penrite Honda Racing rider turned his first laps aboard the latest Fireblade at Morgan Park on Monday in ASBK trim, quickly finding comfort and coming away confident that the bike will be an immediate improvement.

With over 10 horsepower more than his previous race bike recorded on the ER Motorsport dyno, Herfoss welcomed the much-needed increase, but said that collectively the bike was significantly refined in comparison to the model that took him to the 2018 crown.

“It was exciting, as you can imagine, because everything is completely new on the bike – seating position, handlebars, footpegs… everything,” Herfoss told CycleOnline. “The bike’s just so well-refined and my first impression was just that the power is really smooth. Without really riding next to someone, it’s hard to tell how much faster it really is.

“It became pretty evident early in the day that the bike’s got a lot of power. The biggest improvement, I think, is the gearbox. It’s so smooth on downshift, really impressive and it’s a really easy bike to ride. It’s got the Honda characteristic, but revs a lot harder.

“Straight away, at the end of the first day I was a little bit faster than I was at a track-day on the older bike the week before. Obviously I didn’t break any lap records, but everything’s super-promising and we’re actually back out there tomorrow and the next day.”

Equipped with Michelin tyres for this season and continuing to use K-Tech Suspension, Herfoss is working closely with returning crew chief Paul Free – longtime former Team Honda Racing owner – in developing base-settings on the new Honda to suit the ASBK championship.