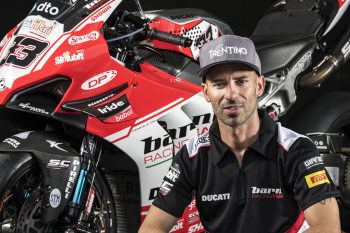 Veteran Italian Marco Melandri will come out of retirement to replace Leon Camier at Barni Racing team aboard Ducati machinery when the Superbike World Championship (WorldSBK) resumes next weekend.

Camier sustained a shoulder injury during winter testing at MotorLand Aragon, unable to complete any of the three races at Phillip Island’s opening round of the 2020 season earlier this year.

The extended break has given Camier a chance to recover, but following on from the Misano test, both rider and team felt he needed more time to get back to 100 percent fully fit. With a condescended calendar of six races in just over two months, both Camier and Barni Racing decided to part ways given the lack of recovery time between rounds.

That move has instead opened the doors for 37-year-old Melandri to return, less than a year after his send-off at Qatar’s 2019 season finale in October. He finished ninth in the final championship standings with GRT Yamaha last season.

“The situation was quite surreal,” Melandri admitted. “In normal conditions I never thought I’d come back, then it seemed like fate chose me. This long and quiet period has regenerated me and made me slip away all the negative things I was focusing on before. Then one by one, almost incredible situations lined up – not having had the chance to ride the Ducati Panigale V4 R was a regret and now the opportunity is there.

“On the Barni Racing Team’s bike there is Showa suspension and since MotoGP period I always have felt great with those products. It’s going to be a championship with only six rounds, all in Europe on tracks that I like, so it’s going to be a limited and time-focused effort.

“If there was anyone who could convince me to come back it was Marco Barnabo. I think the Barni Racing Team is the right team for me, a small family where there is a desire to grow, but also to have fun working with passion. I would also like to thank Claudio Domenicali, Paolo Ciabatti, Gigi Dall’Igna and the whole Ducati team for this opportunity.”

Team principal Marco Barnabo added: “After all that happened, we needed an experienced rider who already knew the tracks, the tyres and the championship. Marco showed great enthusiasm and a great desire to get back in the game, this approach persuaded us that he’s the right choice.

“His value is not debated and, tests aside, he only did one race less than the others – it is as if he never stopped. We believe that in a strange scenario like that, he can be an added value and Ducati also supported us in this choice.”

The MIE Racing Althea Honda Team have also made a change to their line-up for the remainder of the season, as Italian rider Lorenzo Gabellini will join the team alongside Takumi Takahashi in place of Jordi Torres, who had been signed for 2020.

In addition, reigning World Supersport champion Randy Krummenacher recently made the shock decision to quit the MV Agusta Reparto Corse. Swiss rider Krummenacher had tested the Barni Racing Ducati at Misano in late May with promising results, but didn’t secure the seat vacated by Camier.