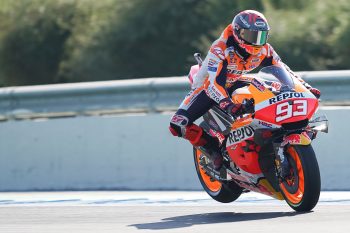 Defending MotoGP champion Marc Marquez will target a proper return at Brno after being unable to complete his miraculous comeback plan at Jerez on Saturday.

The Repsol Honda rider managed to complete a series of laps in FP3 and FP4 just days after undergoing surgery on his right humerus that he broke in last Sunday’s MotoGP opener.

Marquez was only 1.2s away from the top of the charts after he recorded a 1m37.882s in the morning practice, placing him in 19th position. The 27-year-old was 16th in FP4, but returned to the pit at the beginning of Q1 and called it a weekend.

“It has been a difficult week and a lot has happened since last Sunday when certainly I would not have said ‘I will try to race next week’, but when you have a passion for something and you devote yourself to achieving something, you have to at least try so your conscience is calm,” he explained.

“After the operation I saw I had mobility in the elbow and good strength and I was able to do some push-ups, of course there was pain there, but it was manageable. I then spoke with Honda about all of the options and we agreed to try on Saturday, to see what was possible at least.

“Throughout I have listened to the doctors and my body, in the morning today I was feeling good and we were happy with our progress. When it came time to do the time attack, when it is less about being consistent and more about being aggressive, the arm was without strength.

“I don’t know if it was from the swelling or from the heat, but I knew I needed to listen to my body. Throughout this process I have spoken with my Repsol Honda Team and with HRC and I want to say thank you to them for always respecting my decisions.

“I also want to thank the doctors, physios and those close to me for helping me to try and chase this dream. Sadly, we cannot race tomorrow, but I will continue to do everything I can to be back on track in Brno and to fight for the championship.”

With zero points scored in rounds one and two at Jerez, Marquez will mount his challenge from Brno in the Czech Republic on 7-9 August, with at least 11 rounds remaining in his bid to capture a ninth world championship in 2020.