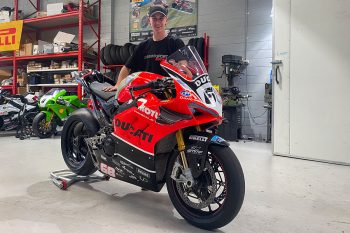 Bayliss, 16, will step up from the Yamaha YZF-R6 he races in the Australian Supersport Championship to line-up aboard a Ducati V4R at Morgan Park for the first time in his young career.

“This is a huge moment in my racing career and something which I am very, very grateful for,” Bayliss said. “I honestly cannot thank Ben [Henry] and dad enough for giving me this opportunity. I’m just really excited to see what the team and I can do this weekend. Being my first outing on a Superbike, I’m not going to put too much pressure on myself.

“I’m simply just going to go out there and have some fun and get comfortable on the bike. I’m very lucky that I’ll have Ben, Mike and dad in my corner ‘coaching’ me through my first weekend of racing on the Italian machine, so I’m in very good hands. Once again, massive thanks to the DesmoSport Ducati team, our sponsors and everyone who supports the team and I. I can’t wait for the weekend, that’s for sure!”

Son of triple Superbike world champion and Ducati legend Troy Bayliss, who is co-owner of the DesmoSport team, it will be a major step for Oli, who currently leads the Australian Supersport Championship after winning two from three races at Phillip Island. Jones will also ride in the club event this weekend.

“I’m pretty excited to see Oli make the step to a Superbike and I’m glad we’re in a position to be able to make that debut on a Ducati,” Troy commented. “It’s crazy to think that I was over 10 years older than Oli when I first raced a Superbike, but the reality is that he’s ready for it. He’s grown up a lot over the last 18 months, both mentally and physically and both Ben and I are looking forward to helping him make the step from Supersport to Superbike successful”.

DesmoSport Ducati team co-owner Ben Henry added: “Oli has been doing a great job on the R6, but as Troy has said, he’s been reaching the limits of the bike as he continues to learn and now it’s time to step up to a new challenge to keep that learning curve going. He’s a good kid and already a great rider, so to be able to put him on track alongside experienced riders like Mike will be beneficial to him.”