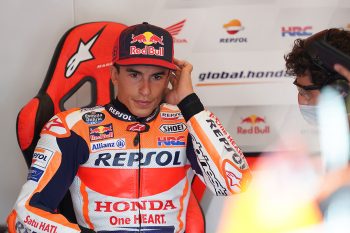 Reigning MotoGP champion Marc Marquez will be sidelined for up to three more months – potentially putting him out for the entire season – as he continues to recover from his broken upper-arm sustained at Jerez 1.

Marquez, 27, fractured his right humerus in the opening round of the delayed 2020 championship and attempted to ride at Jerez 2 just days after undergoing surgery, but sat out the race.

Damage to the titanium plate prior to Brno meant that Marquez would be sidelined for an extended period, but it was expected he would be fit for Misano in mid-September. Instead, his earliest return will be mid-October, otherwise November.

“There has been a lot of talk about Marc’s recovery and the various deadlines, but from the first day after the second operation we have said that the only objective that exists is for him to be 100 percent,” commented Repsol Honda team manager Alberto Puig.

Marquez’s title chances have now evaporated completely, meaning he will lose the title for only the second time since stepping up to MotoGP in 2013. This year’s condensed season is scheduled to conclude on 20-22 November at Portimao, Portugal.

Despite ongoing suggestion that Marquez could in fact be suffering from nerve damage at this point, Honda hasn’t confirmed that is the case.

“The MotoGP world champion, together with HRC, have consulted with and compared the opinions of a number of specialists in regard to the injury to the humerus of the right arm,” a segment read. “As a result, all parties have decided to modify the planned recovery process.

“The objective of both Marquez and the Repsol Honda Team is to return to the world championship when Marc’s arm has fully recovered from the serious injury that occurred in Jerez.

“It is estimated it will take between two to three months before Marc can return to the RC213V. HRC has not set a grand prix for the return of the reigning world champion and will continue to report on the evolution of his recovery.”