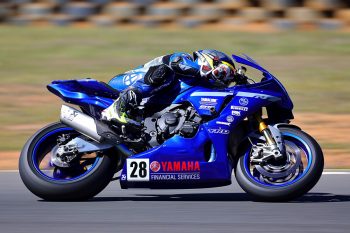 Queenslander Aiden Wagner was back on-track at Morgan Park in the Southern Downs & Queensland Road Racing Series, declaring himself free of injury for the first time this year since joining the Yamaha Racing Team.

“Its been a long time between races, but it’s awesome to be back on track and on my R1M,” Wagner said. “It might not be an ASBK round, but it’s racing and we are fortunate enough to be able to compete, so thank you to The Sportsmen Club, MQ and also Yamaha for making this happen.

“It’s also the first time this year I have been able to race injury-free. I had some hand and wrist issues at the beginning of the year, but have recovered 100 percent and it feels good to be strong on the bike and back towards full race speed.

“The team had the bike in good shape and despite the windy and the cold conditions, we were able to generate some good lap times and for me the hit out was needed to get some race miles back into my mind and body. I enjoyed the weekend at Morgan Park and hopefully we can get some more racing done before the end of the year.”

With the Australian Superbike Championship (ASBK) currently on hold due to COVID-19, the opportunity for the Brisbane-based Yamaha Racing Team to enter Wagner in the state series was a welcome one. Teammate Cru Halliday, who has completed a share of testing during the stoppage, wasn’t able to make the weekend due to state border restrictions.

“I think it’s important we race events like this in this situation,” commented YRT team owner John Redding. “Racing is the reason why we do what we do and there is no doubt our guys love their jobs and miss the rewards and satisfaction racing provides. It was also an opportunity to represent Yamaha and our sponsors at an event and we hope things return to normal soon so the entire racing fraternity can get back in action.”

After missing much of last year with a shoulder injury, Wagner had been under an injury cloud entering the 2020 ASBK season when he fractured his left thumb at the Phillip Island test and had to undergo surgery prior to round one.