Binder puts KTM back in the mix at Misano 2

Another weekend on the sidelines for Gardner following surgery. 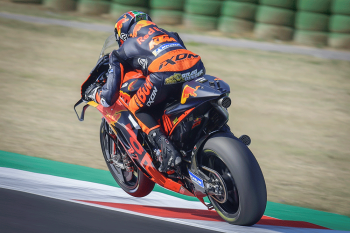 Brad Binder has led a Red Bull KTM Factory Racing resurgence to top Friday practice at the second leg of the Misano MotoGP double header after finishing outside the top 10 in last week’s race.

In second place and only a tiny 0.002s behind was Takaaki Nakagami (LCR Honda Indemitsu), with both riders capturing a reversal of fortunes from the previous week.

Fabio Quartararo (Petronas Yamaha SRT) started strongly in third, where he is looking to recapture the championship lead after crashing out last weekend for the first time since the Phillip Island round last year.

“I was able to make a bit of a long-run, about 16 laps, all in the 1min 32 seconds and that was really positive,” the Fenchman commented. “Our pace feels good. We have modified the settings a little bit since last week, and I feel a bit better on the bike.”

Maverick Viñales (Monster Energy Yamaha MotoGP) was the first of the factory Yamaha’s in fourth while Pol Espargaro (Red Bull KTM Factory Racing) completed a positive day for the orange team, where both struggled to make inroads on the top ten just one week ago. The top five all set their fastest time in the afternoon session and are covered by a hairs width 0.071s.

This leaves a lot of work to be done in FP3 for some of the big names including championship leader Andrea Dovizioso (Ducati Team), who was marginally quicker than Pecco Bagnaia (Pramac Racing). Australian Jack Miller (Pramac Racing) was further back in 16th, one place behind Valentino Rossi (Monster Energy Yamaha MotoGP). Miller was confident for the race, saying, “Today the plan was to find the best solution for Sunday, we worked very well. I think we are in the right way and tomorrow we will try to do the time to make Q2.” 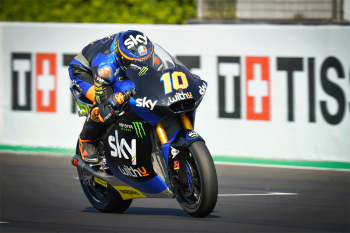 Australian Remy Gardner (OneXOX TKKR SAG Team) will not be racing following surgery on his thumb that was required after an accident in Sunday warmup last week. Gardner had qualified on pole for lasts weeks race and has recently announced his signing with the Red Bull KTM Ajo team. 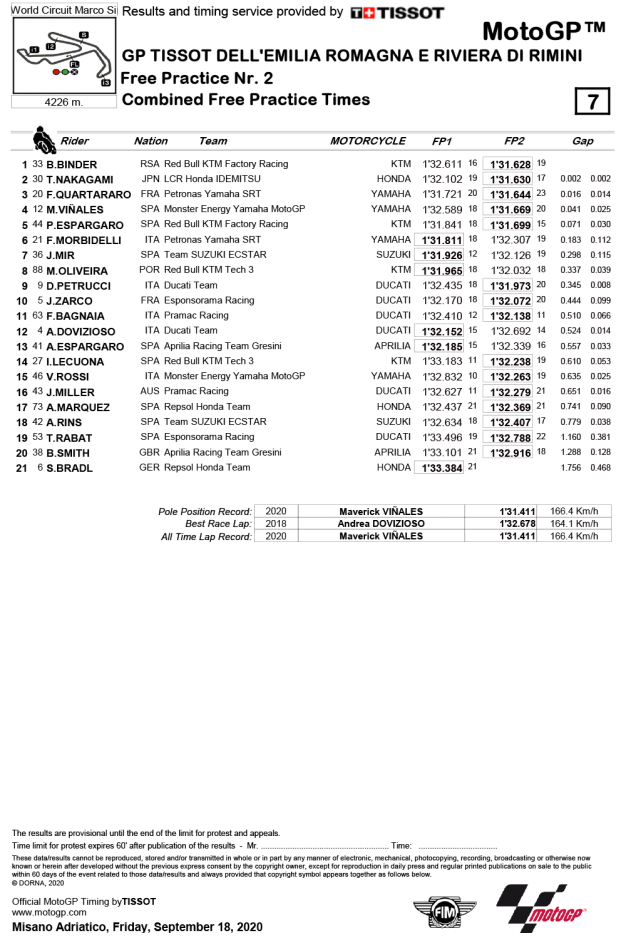 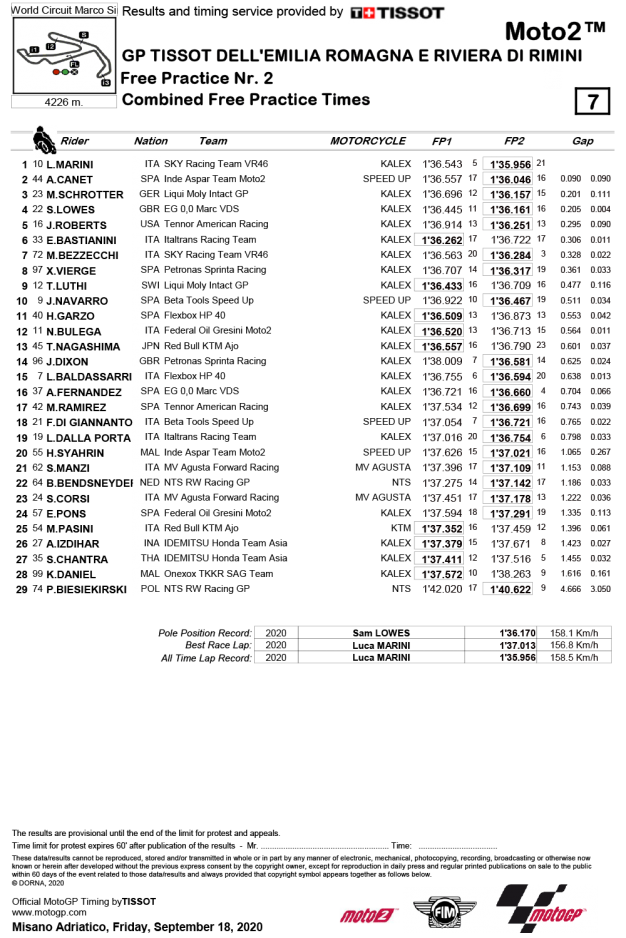 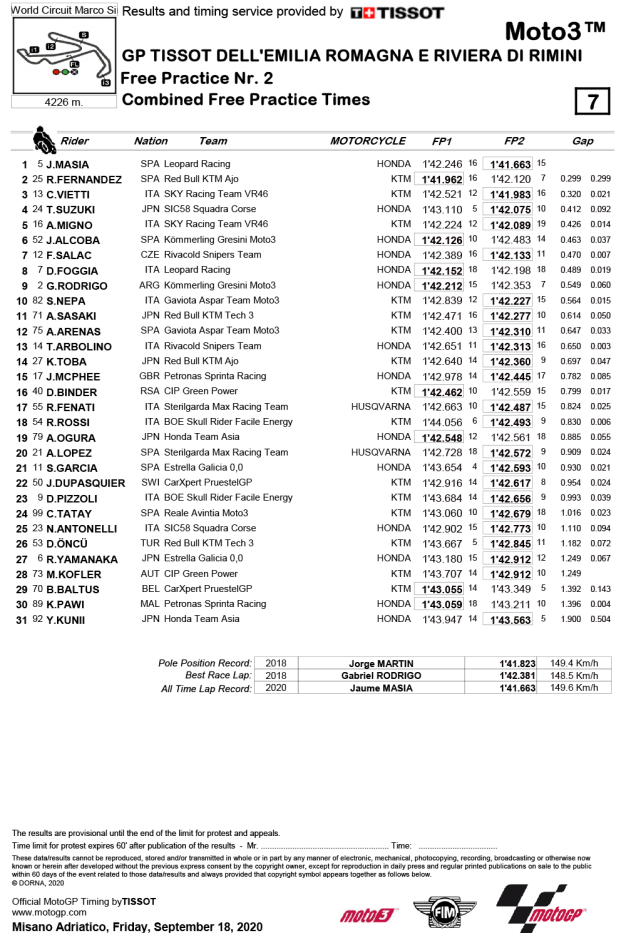 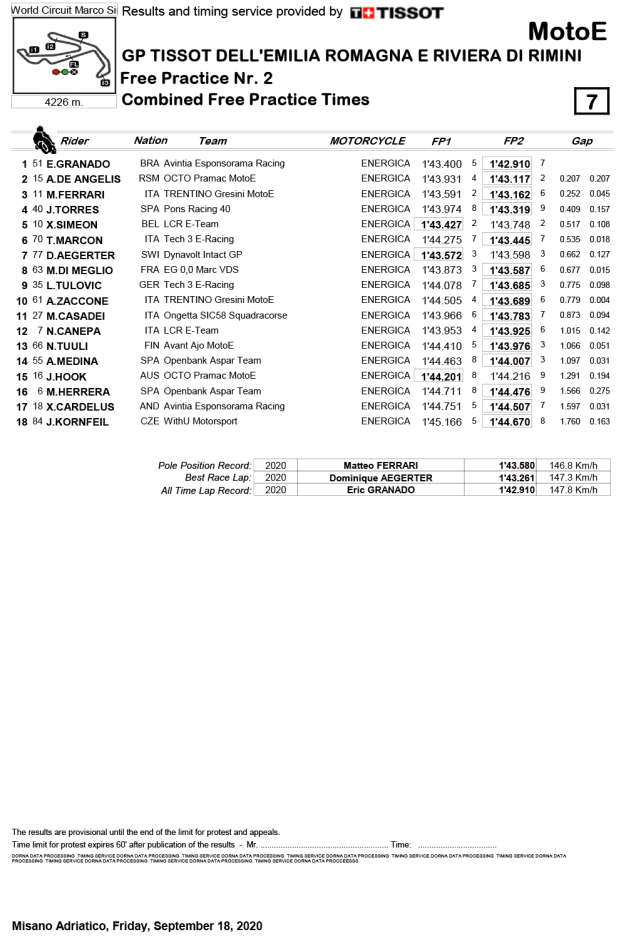