Supersport racer Jack Mahaffy is now in his third year of competition in Europe, where he is racing in the Italian CIV and Italian Cup for the Terra and Moto team on board a Yamaha R6. With COVID travel restrictions he was lucky to make it back for the second round of the CIV, touching down just prior to round two where he promptly fractured his foot in six places.
Mahaffy, one of the stand out talents of ASBK Supersport 300 in 2017, first ventured to Europe in 2018 with Jake Skate and the JDS Moto team. Last weekends meeting was round three of the Italian Cup with at Mugello, coming away with a promising 9-7 result. The season concludes with the final round of the CIV at Vallelunga in four weeks. 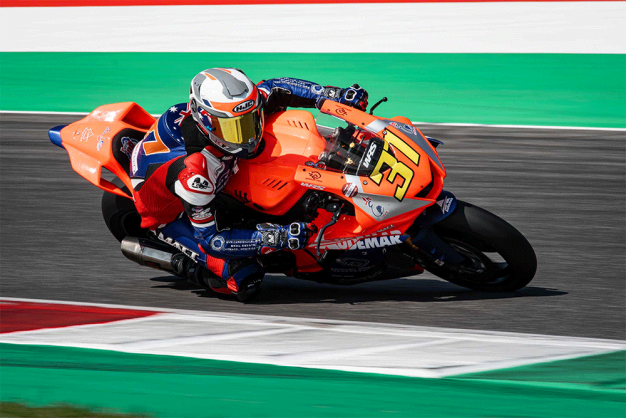 You were lucky to make it back to Italy for the second CIV round. How has COVID affected your year?

It was all very last minute, because I’d applied for three or four travel exemptions from the Government so I could leave Australia with no answer. After they hadn’t responded I was thinking that I wasn’t going to be able to get out of the country, then they sent me an email that said I had to leave within the next two days or not at all!
When I arrived in Italy we didn’t have any testing, I’d never worked with the team, I’d never worked with the new bike – so everything was done on the race weekend, which is never ideal.

Then you broke your foot at that round. There mustn’t have been much opportunity for testing since then, either?

It certainly put a halt on training and testing. Luckily I didn’t lose any more racing. But I did lose about six weeks of potential testing and being fit. It hasn’t been an easy year for anyone, but it’s been an especially difficult start to the season for me…but it’s slowly coming together. If you look at the big picture though, I’m lucky to even be riding. Worst case scenario, I could be stuck in Melbourne and miss the whole season, and then have to start from scratch in 2021. I’d take this crazy year over staying at home!

Where are you living this year, still in Italy?

This year I’m living in the south of France. The team is based in Italy near Bologna, so it’s about a four to five-hour drive for me. I’m living with my manager which has been a massive help, because just finding accommodation is one thing – but finding the budget to live as well, it’s hard. I’m lucky to be with someone who helps me a lot. You don’t come across those types of people a lot in your life, he’s taken me in like a son and I really appreciate it.

To any young racer thinking of making the leap and competing in Europe, what’s the biggest challenge?

I left Australia with Jake (Skate) and Joel (Kelso) and I think that was a good way to do things. I already knew Jake really well and I knew the bike really well, it was just comfortable for me to be working with him and with my own bike.
As a young rider overseas there are so many challenges. You have to learn the language, learn the tracks, different atmosphere, different teams…everything is a big shock, so to minimise the differences by having some familiar people and things around me was a real a positive.
The language was the biggest thing. If you learn a language you have more opportunities. I’m in a team now where no one speaks English, so if I hadn’t of learnt the language there is no way I could be in a situation like this. When you’re overseas if you can learn a language it not only helps in day to day life, but also with the racing scene as well, because the paddock is predominantly Italian and Spanish.

What is it about the Italian racing scene that draws you in?

The passion. There’s no place like home…but, the way of life here, it’s the passion. The passion for the motorcycle industry, once you are in it and understand it, you don’t want to be anywhere else. If you can learn your job and do it well, the opportunities and potential are high.