Expanded series sees preparations in motion ahead of FEB opener. 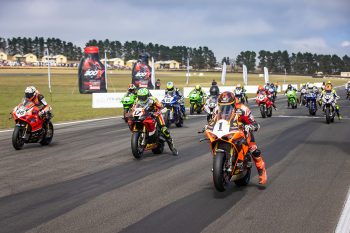 Preparations are in motion ahead of the 2022 Australian Superbike Championship (ASBK), the expanded calendar to be contested over eight rounds this season.

Previous years’ championships have been severely impacted by implications surrounding covid-19, most recently the 2021 series was run over four of the originally-planned seven rounds.

Notably, the upcoming 2022 season is set to see the return of Queensland Raceway – the series’ first appearance to the ‘paperclip’ since 2014 – and Symmons Plains in Tasmania, which was originally scheduled to feature on last year’s calendar before revisions were forced.

Opening the ASBK championship this year will be Phillip Island on 25-27 February, followed by Queensland Raceway between 18-20 March.

Round three sees the series return to Wakefield Park, NSW, from 22-24 April – the only venue to hold an event in each of the last two ASBK seasons – before the Superbike riders head to Hidden Valley, NT, for round four on 17-19 June in a combined two-plus-four event with the Supercars.

Morgan Park opens the second half of the year on 5-7 August, before the ASBK championship then heads to Symmons Plains for round six between 20-23 October.

Next, round seven will take place at Phillip Island on a TBC date in November, expected to be alongside the Superbike World Championship (WorldSBK) if it travels to Australia this year, with the ASBK to conclude once again at The Bend in South Australia from 2-4 December.