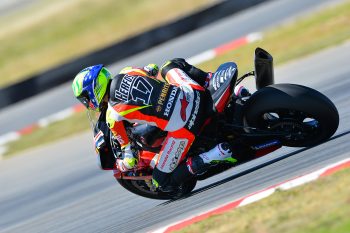 Herfoss made a gutsy return at the 2021 Australian Superbike Championship (ASBK) finals at The Bend from multiple compound fractures and breaks in the lower half of his body, overcoming complications in the recovery process.

The standalone full-time factory Honda team rider was able to make it to the grid in South Australia alongside guest rider Josh Hook returning from World Endurance, however, Herfoss was ultimately unable to start race two.

With over a month to further recover since the final round last year, Herfoss made an appearance at St George Motorcycle Club’s Summer Night Series last weekend, where despite having a crash on the night, remains optimistic about progress made with his physical condition.

“Before I went to the Creek I was worried about the progress I was making from Tailem Bend,” Herfoss told CycleOnline this week.

“After riding the bike throughout the whole day and into the night, it was actually a really big day for anyone really, let alone where I am at at the moment. Also, having a tumble on the night, I put my body through its paces and we now speak on Wednesday and I feel great.

“I feel the body has come along really well and I would say at this point my body is not holding me back as much as fear really. I have just got to get my confidence back and then I’m pretty much good to go.”

Herfoss ultimately achieved a 3-2-DNF scorecard on the night against the likes of Cru Halliday, Josh Waters and other ASBK contenders in attendance. The 2022 ASBK opener is slated for Phillip Island between 25-27 February.