Reigning Australian Superbike champion Wayne Maxwell certainly is a busy person in 2022, coming out of a short-lived retirement to defend his crown with McMartin Racing, while being instrumental in the distribution of Ohvale in Australia and also developing the exciting new FIM MiniGP Australia Series. CycleOnline caught up with Maxwell following the first round of the ASBK championship to get his take on Ohvale and his involvement in the latest ‘Road To MotoGP’ initiative in our region for this Industry interview.

What’s your involvement in the FIM MiniGP Australia Series? There’s obviously a lot of excitement as it’s part of the Road to MotoGP program and a massive thing for the sport.

For me obviously, we rode together at a young age and what it did for our careers to be able to start that bit earlier. For these kids to be able to start four years earlier than what we could start, I think it is going to be fantastic. It’s been a series where it’s the same as 21 other countries, and it is pretty cool, same tyres, sealed engines, on tracks where it’s not all about slip-streaming, it’s about skill and cornering, that’s really going to show. It’s another great initiative by Dorna and MotoGP, what they have done with their promotion and the FIM. I’ve been the importer of Ohvale, we took on the initiative to become the promoter of the MiniGP Australian Series. I’m so excited – I remember hanging out with you guys on school holidays – and to create these memories for these kids forever. I have a good knowledge of racing, having raced from that age and coming through the junior ranks and I had to work hard to get to where I am, so hopefully I can pass on that knowledge.

When did the distribution start? I know you have been doing a lot of ride days and that on the kart tracks.

Yeah, so 2016, pretty much 2017, then I came into the business in 2018 with Ohvale with my two partners Nick [Angelopolous] and Dim [Dimitrios Papaconstantinou]. It works so good, our partnership, it’s so positive, those guys are two intelligent, passionate guys. It is interesting seeing people from not so close to the sport bring other stuff in and some crazy ideas. Hopefully we can bring some of those ideas and make the sport better from grass roots. 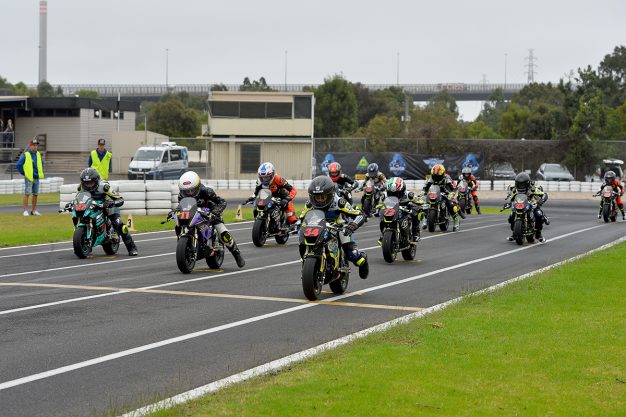 Are you promoter, rider coach, what exactly is your role?

All of the above! I’ve got a lot of caps on at the moment [laughs]. I’ll do some coaching and stuff and then we will see, if I’ve got too much on and I can’t provide for what the kids need, then we will bring in a coach and try to build up and stuff. We did a camp last week and all the kids said it was the best they have ever had, so I hope we can do that, we’ve seen what other guys have been able to do as kids and how much better the talent pool is getting and that excites me.

One of the unique things about these bikes is, not only are kids getting on them, but people like yourself, grand prix riders and very proven and credentialed people train on them. That’s kind of unique in itself…

Yeah, I love riding and training on them and it’s good because everyone sort of has the same stuff. When someone is faster than you somewhere, you are like ‘what is he doing different to me?’. Two of the guys that were on the podium in the last race of the 300s [at ASBK round one, Phillip Island], I rode with them last weekend and to see those guys improve the way they have, it should be good and I can’t wait.