The 2022 MotoGP World Championship roared into life at the Lusail International Circuit and the opening round was full of surprises. New contenders, favourites suffering misfortune and fresh storylines to unpack, the series is shaping up for an exciting year ahead. In this Countdown, CycleOnline.com.au highlights key moments from this year’s opener. 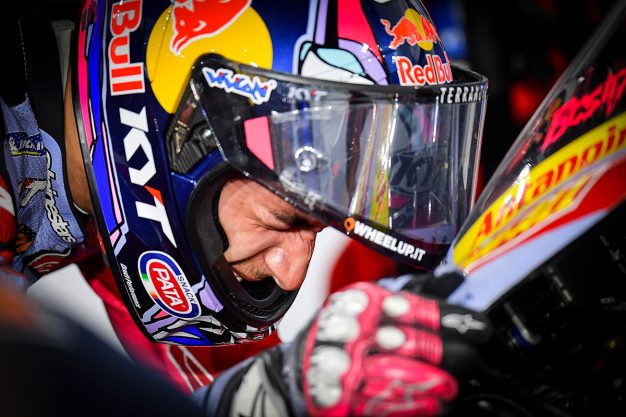 8. Kelso scores a point to begin maiden Moto3 World Championship campaign:
In what marked his first visit to the Lusail International Circuit, Joel Kelso scored a commendable P15 and a point to open his 2022 account after qualifying 17th. Don’t expect the Australian charger to be complacent there, however, as Kelso showed glimpses of his potential throughout the weekend particularly when he finished fifth in FP3. The CIP Green Power rider admittedly found a step in bike set up and was pleased with his race pace, so a stronger qualifying at Mandalika should see him fighting even further up the grid.

7. Electronics issue forces Miller to retire:
The start of 2022 is vital for Australia’s Jack Miller. With Ducati Lenovo teammate Francesco Bagnaia signing a contract extension through to the end of 2024, and fellow Desmosedici riders Jorge Martin and Enea Bastianini performing well, it’s no secret the number 43 is under pressure to keep his seat. A solid P4 in qualifying positioned Miller for a strong race, but his hopes of a season-opening podium were over pretty much from the moment the lights went out. A difficult start – such experienced by all Ducati riders – dropped him to P10 by the end of the opening lap before pummeling down the order to 15th  by lap five as an electronics issue reared its head. On lap six the issue made the GP22 virtually unrideable, forcing Miller out of the Grand Prix with a zero points haul to start the season.

6. Gardner on top in the battle of the rookies:
After injuring his right wrist in a training accident and having a majority of his pre-season testing impacted as a result, many would have written off Remy Gardner to walk away from round one as the top-placed rookie. The Moto2 World champion quietly went about his business throughout the weekend, chipping away to qualify 0.5s quicker than teammate Raul Fernandez before keeping his nose clean to emerge on top of a four-way battle for the final points-scoring position. Gardner has notably adopted a levelled headed approach since joining the Red Bull KTM Ajo Moto2 team last year, a mindset that carried him to his first world title. From what Gardner has demonstrated in the build-up to this year and overcoming the pre-season adversity, it can be said he is carrying the same mindset into 2022, which will likely see him make methodical progress as the rounds unfold.

5. Fabio not in the fight:
Reigning MotoGP World champion Fabio Quartaro was notably absent from the front of the field at Lusail. Pre-season murmurs and results suggested Fabio wasn’t entirely comfortable with the Yamaha, and the Frenchman expressed dissatisfaction that Yamaha didn’t deliver key improvements he desired, namely increased top speed. Qualifying in 11th left Quartararo with work to do, particularly when he faced a close to 15kph top speed deficit to the Ducati’s. ‘El Diablo’ did exactly what he needed to do off the start, launching ahead of Bagnaia, Martin and Miller. However, Quartararo was never able to work his way forwards from there, finishing a disappointing P9 to start the year. If there’s any consolidation Quartararo can take from Qatar, it’s that championship rivals Bagnaia, Martin and Miller all scored zero points, and Marquez was only P5, limiting points lost. 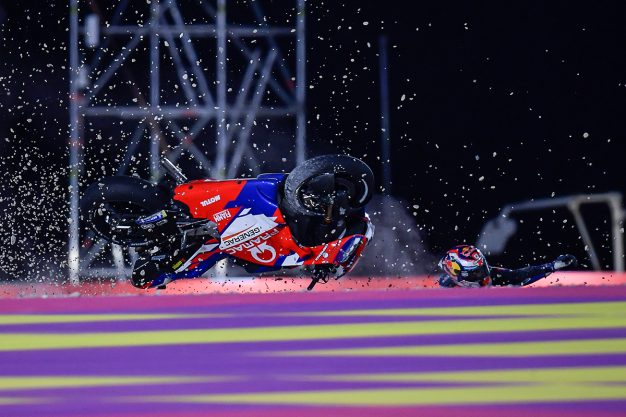 4. Bagnaia takes out Martin in a high-speed crash:
Perhaps one of the biggest surprises of the Qatar weekend was Francesco Bagnaia. Off the back of a strong end to 2021, ‘Pecco’ was hotly tipped as a title favourite entering the 2022 season. A lowly P9 by his standards in qualifying, raised an eye-brow before a poor start relegated him to P14 in the opening lap of the race. Bagnaia charged through to reach 10th by lap three, then made a move past Quartararo on lap nine. Catching pole setter Jorge Martin over the next three laps, the number 63 attempted a move up the inside on the brakes into turn one, unfortunately folding the front and taking himself and Martin down and out of the race. A devastating blow for both riders who were deemed candidates for the round one victory prior to the weekend.

3. Return to form for KTM mounted Binder:
A P2 in Lusail marked a welcome return to the podium for KTM Factory Racing’s Brad Binder. Known notoriously as a Sunday racer, Binder swiftly moved from seventh to third off the start. The South African stayed inside the top three for the entire race, passing Marquez for second on lap six before being relegated back to P3 by Bastianini on lap 13. In the closing stages of the race, Binder picked off Pol Espargaro for second and kept the pressure on Bastianini, completing the 22 laps just 0.346s behind the Italian. The rostrum finish in Qatar was Binder’s first since the extraordinary gamble to stay on slicks in last year’s rain-struck Austrian Grand Prix paid off. Binder however was the only KTM rider that featured near the front at Qatar, 40 seconds up the road from the next best KTM Remy Gardner. If the pre-season form is an indicator, the Austrian manufacturer has work to do if it wishes to be a championship contender.

2. Espargaro showing early promise with the new Honda:
Pol Espargaro is not shy to express his satisfaction with the new bike Honda has brought to the table for 2022. Fast throughout much of the pre-season, the Spaniard carried that form into the opening round where he led for the majority of the race, only to be passed by Enea Bastianini and Brad Binder in the closing stages. It was by far Espargaro’s strongest race showing with the Respol Honda Team, ultimately finishing 1.351s from the victory. The number 44 has demonstrated his ability to be fast on a number of different packages, scoring podiums with KTM, Yamaha and Honda in MotoGP, however, has lacked the consistency and perhaps the overall package to be a real title threat in previous years. Could the new Honda be that package? Time will tell.

1. Bastianini breaks through:
After a relatively quiet start to his debut MotoGP campaign in 2021, Enea Bastianini stormed onto the scene showing immense race-pace to claim two podium finishes in the second half of the season. With only one top 10 qualifying position last year, Bastianini impressed in Qatar when he slotted his year-old Gresini Racing Ducati GP21 into second on the grid, and certainly entered Sunday night as a threat, considering his proven ability to maximise the life out of a tyre and strong pre-season form. Getting what was the best start of the front running Ducati riders, the Italian only dropped to fifth before a mature and collected ride saw him slice past his rivals one by one, ultimately withstanding pressure from behind to claim his first race win. Bastianini and the Gresini Racing MotoGP team were vocal in that they needed to capitalise on opportunities early in the season, as it is expected rivals on the latest 2022 machinery will get stronger as the year progresses. Gaining valuable points on key championship favourites at Qatar, it will be interesting to see how long ‘The Beast’ can maintain the points lead.