Australian gearing up for 2022 season-opener at Aragon. 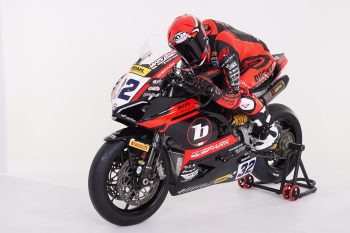 The Barni Racing Team has uncovered its 2022 livery ahead of Australian World Supersport debutant Oli Bayliss’ first competitive outing with the team in round one of the season at Aragon.

Bayliss enters the Supersport World Championship with his own pedigree of impressive results, most recently winning an Australian Superbike race with DesmoSport Ducati at Hidden Valley during his rookie campaign in the category last year.

Upon moving to WorldSSP for 2022, a rough start to his European stint of testing onboard the Panigale V2 saw the 18-year-old crash at Portimao, fracturing his right ankle after falling at turn five during the opening stages of day one.

It didn’t take Bayliss long to begin the recovery process and now appears ready to resume testing ahead of the scheduled season-opener between 8-10 April. He also spent extensive time aboard a V2 locally prior to heading overseas.

This week’s team launch took place at the Misano World Circuit, where the outfit’s Superbike rider Luca Bernardi was also presented alongside the team’s CIV line-up led by Michele Pirro.