Concussion rules Marquez out of MotoGP at Mandalika 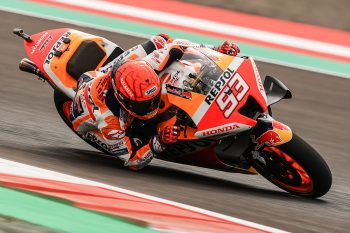 Eight-time world champion Marc Marquez has been ruled out of today’s Grand Prix of Indonesia at the new Mandalika Circuit after suffering a concussion in a frightening morning warm-up crash.

The Repsol Honda rider went down in spectacular fashion at turn seven, quickly returning to his feet, but being declared unfit soon afterwards following a local hospital visit.

“Marc is fine,” explained Dr Angel Charte. “He had a high energy crash in the warm up, which resulted in a head injury. Initially, we examined him here and then referred him to the hospital in Lombok. He underwent several radiological tests, which were negative.

“In agreement with the rider and the team and, due to the fact that this type of pathology requires a period of observation between 12 and 24 hours, the rider, the team and the MotoGP medical staff have decided to declare him as unfit.”

Marquez was due to start from 14th on the grid in the delayed race, with defending world champion Fabio Quartararo (Monster Energy Yamaha) on pole position in a return to form aboard the factory YZR-M1.