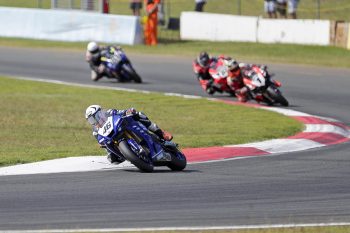 Yamaha Racing Team recruit Mike Jones was proven unstoppable on his way to a perfect weekend in the Queensland Raceway round of the 2022 Mi-Bike Australian Superbike Championship (ASBK).

It was a commanding first win of the year for Jones this morning, riding to a 5.670s advantage following 16 laps to signal that he will be in contention for a third-career crown this season.

After claiming pole position on Saturday, Jones made his way into P1 by lap three by early leader Bryan Staring (DesmoSport Ducati). Things calmed from there until Staring crashed out of second on lap 10 at the final turn.

Staring remounted and fell again as he attempted to get back on track – the former points-leader eventually crossing the line in 17th position. He did, however, earn a new lap record of 1m07.861s on lap six.

That allowed Jones to sprint away to victory from defending champion Maxwell, with Josh Waters getting the better of Maxima BMW teammate Glenn Allerton for the final place on the podium.

Fifth was the end result for Cru Halliday (Yamaha Racing Team) after having to recover from a slow start, well ahead of Troy Herfoss (Penrite Honda Racing), who in turn was comfortably in front of Arthur Sissis (Unitech Racing Yamaha). Positions eight through 10 included Anthony West (MotoGo Yamaha), Aiden Wagner (Addicted To Track Yamaha) and Mark Chiodo (Yamaha).

From the rear of the grid and after missing qualifying yesterday, the newly-married Daniel Falzon (JD Racing Yamaha) recovered for 11th, while notable non-finishers included Jed Metcher (727 Moto Yamaha) as he crashed out, with Kawasaki Connections’ Matt Walters retiring from the race in the early laps.

If race one appeared ‘easy’ for Jones, this afternoon’s second 16-lap encounter appeared a walk in the park as he stormed away to complete a perfect weekend and win by 4.182s.

The Jones/R1M combination was too strong on Sunday from the front of the grid, this afternoon comfortably ahead of previous points-leader Staring, with Maxwell limiting the damage at a track he’s not fond of for P3.

It was a near-podium for Sissis this time out in fourth, a second clear of Waters, again ahead of teammate Allerton. The top 10 in race two was Herfoss, West, Wagner and Chiodo, with Falzon once again taking 11th.

The round podium was made up of Jones, perfect on 51 points by virtue of pole and both victories, ahead of Maxwell and Waters, while in the series it’s now Jones who leads by a commanding 16 points over Staring, with Waters third and Maxwell right there in fourth as he bids for another crown.

Round three of the 2022 ASBK season is set for Wakefield Park in New South Wales from 22-24 April, with all eyes on Jones following a dominant performance this weekend in what was his home round on the calendar. 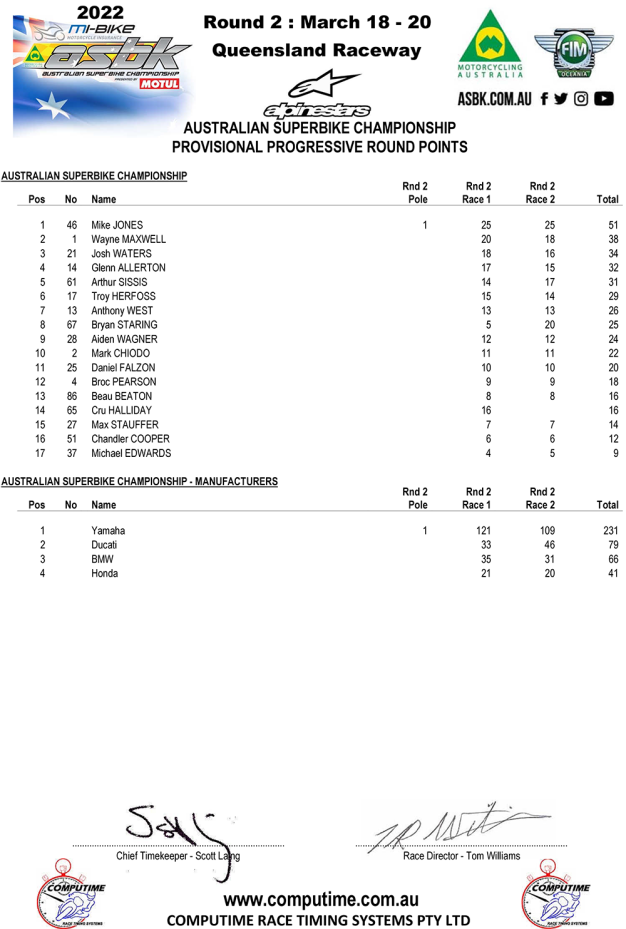