‘I did struggle on the front all weekend’ – Maxwell 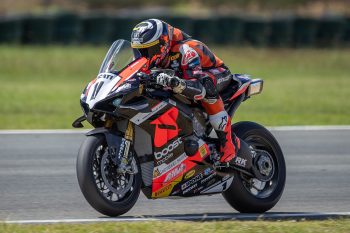 Having a distinct advantage over his rivals at Phillip Island, Wayne Maxwell couldn’t replicate that dominance at Queensland Raceway admitting ‘I did struggle on the front all weekend’, ultimately P2 for the round.

Maxwell crucially missed the private two-day test at the venue setting him off on the back foot at Queensland’s round two, but constant progress made by himself and the McMartin Racing team saw him edge his way forwards.

The current ASBK champion qualified on the front row with a 1m07.996s, three-tenths from Mike Jones on pole, and was unable to match the Yamaha Racing Team rider’s pace in the two 16 lap outings.

“I did struggle on the front all weekend, it was my main complaint, especially in race two we went the wrong way with the bike, so I sort of struggled a little bit there,” Maxwell explained.

“I think I just overloaded the front tyre more so, the way Mike rode the track was flawless and really smooth, I was nowhere near as accurate as what he was, so that showed in the results.”

A 2-3 scorecard sees ‘the train’ now P4 in the championship standings, 22 points down on Jones. After a costly crash during the season-opening round at Phillip Island, Maxwell highlights the importance of returning to the top step at Wakefield.

“Mike had a stellar round, and when you give guys like Mike or Bryan or any of these guys a headstart in the championship, it’s really hard to make up,” Maxwell added.

“We are going to have to knuckle down, and try to start winning some races, from Wakefield onwards. Those tracks are more sorted to my style, we hope to be able to convert.”