Miller ‘probably missed something’ in set-up on way to P4 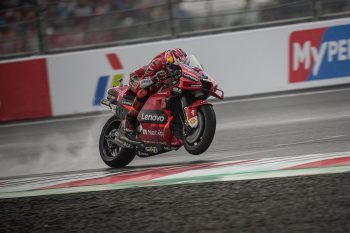 Miller started from P9 and made his way into the lead by lap two, but from lap four was relegated down the order by his rivals before ultimately missing the rostrum by 2.5s.

“Unfortunately, today, we didn’t have the pace to stay in front until the end,” Miller explained. “I got a good start, but I didn’t have much grip on the rear. Since we hadn’t ridden in the wet all weekend, we had to guess the right setup for those conditions, and we probably missed something.

“Throughout the race, my pace was consistent, and I managed to go a little faster towards the end, but when I reached my limit and realized I couldn’t do more, I preferred to manage the race and bring home a good result. All in all, it was a positive race, and we’ll try again at the next Grand Prix.”

The number 43 scored a valuable 13 points for his efforts, opening his account for the 2022 season after a technical fault brought a premature end to his season-opener at Lusail.

Just 17 points from championship leader Enea Bastianini, Miller will get his next opportunity to land a podium finish at Argentina on 3 April, round three of the 2022 MotoGP World Championship.