Multi-superbike champion building to get the best out of BMW. 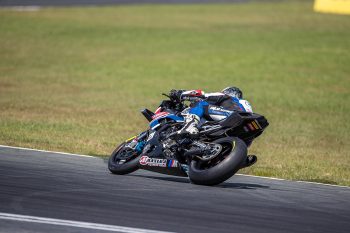 Maxima BMW’s Josh Waters took the next step in his adaption to the M 1000 RR during Queensland Raceway’s round two of the 2022 Mi-Bike Australian Superbike Championship, finishing third overall as his consistent start to the season continued.

Waters, 35, worked his way forwards from fifth on the grid to finish the opening race in third, before a P5 in the second outing saw the Victorian secure the final podium spot for the round.

Having finished each of the four completed ASBK races in 2022 in the top five, Waters is positioned a strong P3 in the championship while a number of key championship contenders have already suffered a DNF or low points score.

“It’s great, only the second hit out with the team and still learning the bike. To be on the podium already and third in the championship is better than what I expected.

“I’m a racer though, I’m going to try my hardest and I want to win. Will keep trying and hopefully can keep building.”

The switch to BMW machinery for 2022 means Waters has ridden three different manufacturers in three years, previously Suzuki mounted for 2019 in his own privateer outfit and Kawasaki equipped for 2020 with the Bcperformance team.

“To stay on the same kind of bike for more than… the last couple of years I have jumped factories, I really enjoy riding this bike,” Waters added. “For sure, the technology and electronics side is another level and also I need to trust it a little more to get the best out of it.

19 points separate Waters from championship leader and round two winner Mike Jones as the series heads to Wakefield Park on 22-24 April.