Yamaha Racing Team’s Mike Jones completed a flawless weekend at Queensland Raceway’s Mi-Bike Australian Superbike Championship round two to boost himself into the championship lead, as teenager John Lytras showed he is a force to be reckoned with in Supersport after emerging with the overall victory. CycleOnline caught up with both riders after the races for this Debrief interview. 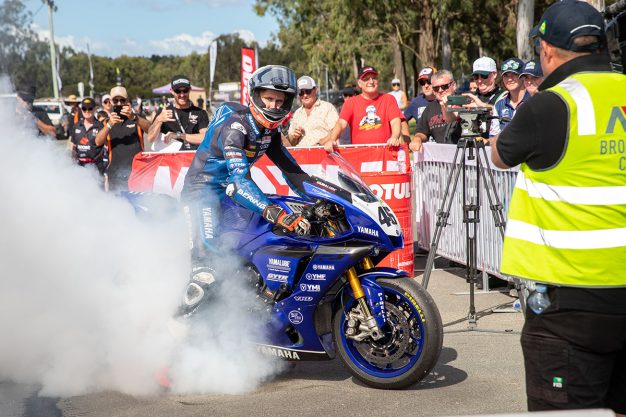 Pole position and two race wins, how does it feel to get your first Superbike round win with Yamaha at your home race?

The feeling is amazing. To have a perfect weekend, just under the circumstances, coming to the Yamaha Racing Team for the 2022 season, and being able to have a perfect weekend so early on at round two of the championship is just surprising and it’s really incredible. It’s the perfect boost that myself and the team need. It’s been a while since I have had a win, and also for the team, so I think that’s really key for us, to get that confidence so early in the championship and proves to myself and everybody that we can achieve the goal of winning the championship, which is what we set out to do this year. Of course, to do it at your home round being Queensland Raceway, to do it in front of the home crowd is just fantastic, there’s a lot of friends and family there and so many of my supporters. It just makes it all that little bit more special.

I remember you saying tracks like Queensland Raceway can play into the Yamaha’s strengths with the importance of good bottom-end off the turns. Approaching tracks like Wakefield, how important is it for you to capitalise on these circuits where the characteristics of the R1 might be stronger?

I personally believe that the Yamaha’s characteristics with the engine and the chassis, suit the tighter circuits. I know that didn’t seem like the case with Queensland Raceway, but that’s still a circuit that is much smaller than Phillip Island or The Bend. We’ve got a few of those tracks coming up next on the calendar, and the next round is at Wakefield Park. That is a circuit I believe will suit this bike very well, and it will be very important for us to try to get the absolute maximum out of the bike at the next round.

Being just your second race weekend with the Yamaha Superbike, how would rate yourself on where you are currently with the bike? How far down the line are you with the progression on the R1?

That’s a little bit of a hard question to answer, to be honest. You don’t really know where the full potential is, you are always chasing a development or progression. I feel that while obviously, this weekend was a perfect weekend in terms of results, I still believe there is more to come from myself and the bike. That’s just purely from the amount of time, I’ve had really a limited amount of time on this bike and working with the team, so I believe as the season goes on and I spend more time on the bike and I get even more comfortable with it, more refined, I see that we still haven’t reached our full potential. That’s kind of exciting for me.

I know it’s only two rounds in, but at what point do you start thinking about the long game in the championship? If you look at some of your closest rivals, Bryan [Staring], Wayne [Maxwell] and Cru [Halliday], they’ve all had a DNF or a low points score. You’ve shown you have consistency, but also the outright speed to win races, if it comes down to it when do you start thinking to go for points instead of pushing that extra limit for a race win?

From my point of view, that started prior to the first round. I understand that the championship is long and when you feel good and the bike feels good and you are comfortable and you have the confidence, then you can push and win the race. You know when it’s the right time to do that. Obviously, at Phillip Island I wasn’t at that level and our competitors were stronger than us, even my teammate Cru. You sit, you consolidate and you take the points that you can get. Here at Queensland Raceway, it felt great, I was able to take both wins, but I’m always conscious of that and thinking about when is the right time to push that little bit extra, or just consolidate. To answer the question, that started for me at the beginning of the season. 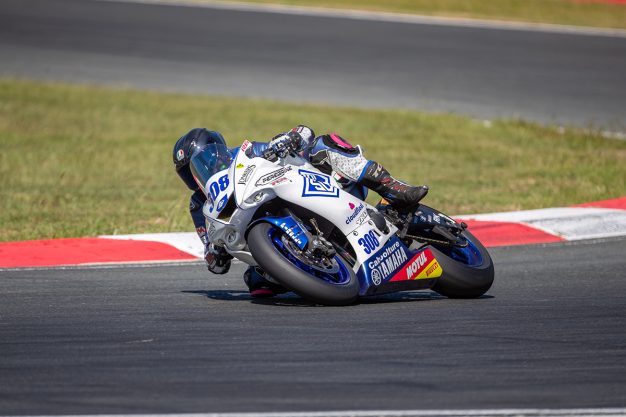 It feels pretty cool to get that win. It would have been awesome to get that by finishing in the P1 position, but to still to get those points on the board, it’s great.

It’s a bit of a unique way to find out you are the overall winner, what were your thoughts initially when you heard the news [that initial victor Tom Edwards was disqualified]? Was it something of a surprise?

It was a bit of a shock, to be honest, I didn’t think Tommy [Edwards] would have the team that would do that. It still doesn’t feel like a win, but it kind of does at the same time. To get a proper win where I crossed the line first would have been good, it was kind of weird that way it happened.

You were up there for the entirety of the weekend either way, so what was the key to showing that form in Supersport at ASBK level? You had a bit of a tough start to the year at Phillip Island, but you came out guns blazing at Queensland Raceway. Was there anything that changed in between the rounds?

Phillip Island we ran into some troubles with the bike with some bad fuel, whereas this weekend we didn’t have any problems with the bike, and we had the chance to do a bit of testing at Queensland Raceway beforehand. Just being in the top two every time we went out made it heaps easier and gave me a lot of confidence.

Now you’ve shown you can be a front-runner in Supersport, is that a sign of things to come?

I’m hoping so. We will see how we will actually go, but I think we can – especially now someone isn’t on an illegal bike, which will help. It was quite a big modification what they had done to that bike from what I heard… it’s pretty horsepower-gaining what they did. Hopefully, we can race close to the front and be at the front at different tracks and now everyone should be on a fairly similar bike.