Bikebiz apologises to Edwards after infringement

Independent engine builder responsible for work prior to Queensland. 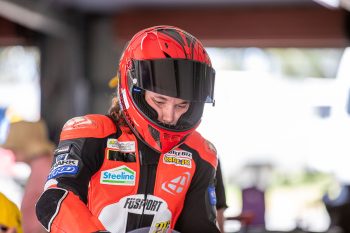 After the Queensland Raceway Supersport shake-up that saw Tom Edwards disqualified, Bikebiz has moved to apologise to the New South Welshman and a variety of stakeholders that were impacted in the infringement.

Edwards, who competes with Bikebiz backing, experienced a near-perfect weekend in Queensland, qualifying on pole and winning both races, along with setting a new lap record – all stripped away as a result of post-race technical inspections.

“Our R6 engines are race-prepared interstate by an independent engine builder and, although we have been informed that this breach has been considered to be of a minor nature, it was deemed a breach of ASBK regulations.

“Bikebiz is a 35-year family retail motorcycle business that prides itself on its reputation and this outcome is truly regretful for all concerned. We are confident that the championship is still in sight for Tom and the Bikebiz team.”

Following the amendment, Edwards sits 14th in the Supersport championship standings, 52 points back from leader Olly Simpson with 10 races remaining.