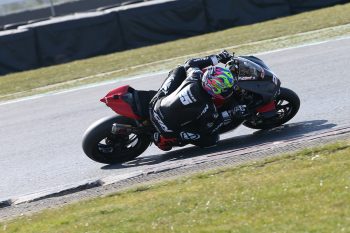 The weather provided good conditions for the majority of the series’ first official pre-season outing, allowing Brookes to productively work through a variety of programs ahead of the next test at Donington this Thursday.

The MCE Ducati rider ultimately left Snertton just 0.115s from pace-setter and fellow Australian Jason O’Halloran – who set a 1m46.571s – and less than a tenth from new teammate Tom Sykes, who was second overall.

“We’ve had a great test at Snetterton, the weather has been unbelievable for the time of year, and we’ve managed to work through some key points,” Brookes explained. “Today was critical to finish the circle of changes. The session we did wasn’t particularly important for the lap time that we could achieve, but more the feeling that I was getting from the bike.

“Yesterday’s bike I was happy with, we were under the lap record, and I was able to do competitive times, today’s bike was more difficult to ride, so that gives everyone in the team a clear direction of which way to go, and I think moving forward now we can make some good progress.”

Brookes enters 2022 hungry to return to the top step following a challenging 2021 BSB campaign that saw him complete the year sixth in the standings.

Three days of official pre-season testing remain – one at Donington and two at Silverstone on the national circuit – before the series commences at the latter venue on 15-17 April.